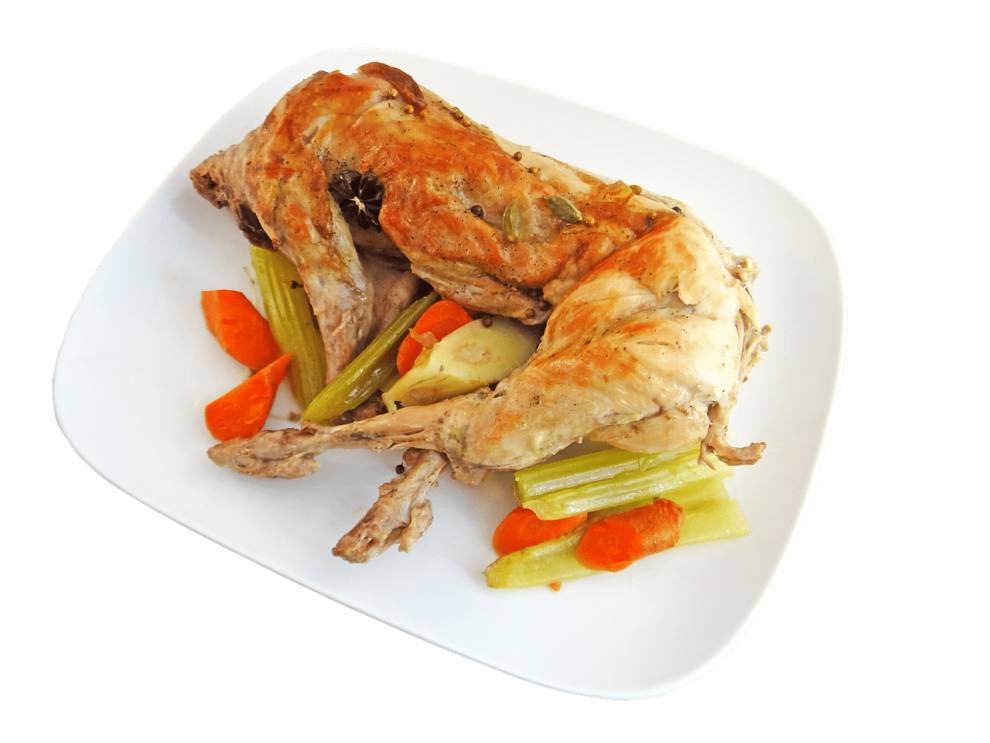 Rabbit is a meat highly prized for its nutritional properties as well as its flavor, aroma and texture. It is considered lean or “white” meat, not because of the low amount of myoglobin (the protein that gives meat its color) but rather because of the quantity and quality of its fat.

The general consensus is that rabbit tastes similar to chicken. This is not entirely true, mostly because rabbit has a gamier and more intense flavour. The texture is different too, rabbit being more on the dry side.

Some types of rabbit with great taste include Californian rabbit, silver fox, and Cinnamon rabbit.

Rabbits raised on farms generally have more fat than those raised in the wild. Their meat has a lighter, pinkish color and a more tender texture that hardens as the animal ages. It breeds more intensively than the wild rabbit and has a milder flavor.

These animals are lighter and finer than farm bred. They present a harder meat and have a lot of flavor due to the aromas provided by the foods they consume in the wild. Its meat is more reddish in color than the farm rabbit and contains less fat.

As rabbit is a white meat, it is a food of choice on low-calorie menus if cooked simply, without excess fat. In fact it is recommended for those following low fat, low cholesterol diets and for those with cardiovascular disorders due to its nutritional composition.

Its meat is soft and easy to chew, which is an advantage for those who have difficulty chewing, especially if it is stewed or braised and accompanied with sauces and vegetables. However, its abundance of muscle fibers makes rabbit more difficult to digest, so not the best meat for those who suffer from a delicate stomach.

Usually rabbit is sold whole, but you can also ask your butcher to break it down into smaller cuts for you. Or you can turn to the internet for helpful tips on how to portion your rabbit.

If you are trying rabbit for the first time, go for the loin or the saddle, which are the most tender cuts. The hind legs tend to be tougher and almost always need a moist braise; as for the front legs, you can set them aside for stock or stew.

The pelvis area does not have very much meat on it either, therefore put it by with the front legs for a nice stew or a sauce.

Rabbit: An Ally in the Kitchen

It is very important to choose healthy ways of cooking rabbit to enjoy its tasty, juicy, healthy meat, which is also inexpensive compared to other foods.

Rabbit is a meat of great gastronomic versatility and, therefore, can be used in a wide variety of culinary preparations. It can be roasted, baked, grilled, sautéed with vegetables, stewed, cooked, marinated, candied, and fried and can be used as a starter or as an integral part of the main dish, alone or accompanied with vegetables.

It marinades perfectly with a multitude of aromatic herbs (bay leaf, parsley, thyme, rosemary, dill, etc.) which, in turn, enhance its qualities. Rabbit tends to be a bit on the drier side so many people prefer to marinade it before cooking.

Usually the rabbit you buy from a butcher will have been farm raised. When buying, it is advisable to choose young animals, three to five months old, that have a short neck, round, bulging knees, and muscular meat.

The Benefits of Eating Rabbit

Around 72% of the meat is water. The specific amount varies depending on the breed and its feeding regimen.

Without a doubt, this is its most remarkable nutritional component. Rabbit provides proteins of high biological value, containing all the essential amino acids that the body needs at different times of life.

Its content ranges from 18 to 20 g of protein for every 100 g of meat. In addition, it is an easily digestible meat and very tender, due to its low collagen content. For this reason, rabbit is highly recommended for those who are prone to hyperuricemia and/or gout.

Rabbit is a lean meat, low in fat (no more than 5%) and cholesterol. Its lipid profile is quite balanced, with a lower proportion of saturated fat compared to other types of meat, which is why it is recommended for preventing obesity and cardiovascular diseases.

However, its fat content varies depending on the species, breed, age, gender, the cut being consumed, and the animal’s diet.