” For many steak lovers, no cut of beef sings to the soul of the carcass-consuming carnivore like a Delmonico, made famous at the eponymous restaurant in New York City, which operated in different locations starting in 1827. Originally opened by a retired Swiss sea captain wary of life on the rough oceans, who found a home in the bustling streets of Manhattan, the original steak house served their Delmonico at a whopping 2 ½ pounds per serving. 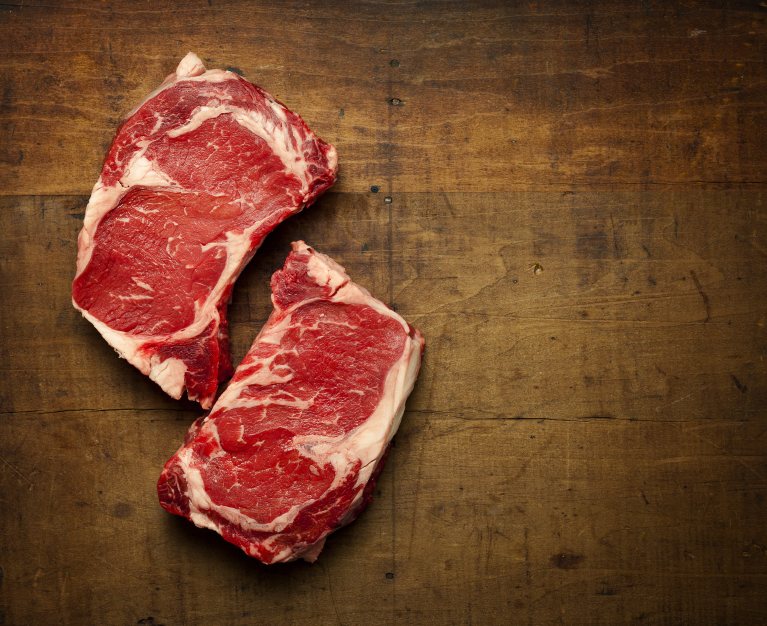 Across the board, they recognized the Delmonico as a ribeye with the tail left on.

Interestingly, I stumbled across some information in a very good periodical recently that indicated my ignorance of what exactly a Delmonico Steak is. In the article, a fully capable corporate Executive Chef noted that their Steakhouse Delmonico was in fact a bone-in New York Strip Steak. I was raised and trained with the notion that the Delmonico was similar to a ribeye steak (Scotch Fillet), cut from the same beef primal, but with the tail still attached, thus differentiating it from the aforementioned ribeye. This would obviously have no relation whatsoever to a Strip Steak.

To quell my insatiable appetite for useless culinary trivia, I dove into some rather intense research. This included visiting a number of websites (bearing in mind that the internet is the bathroom wall of the information age), referring to industry trade publications on meat purchasing, and leaving calls for various butchers and meat brokers I have used in the business over the years.

Across the board, they recognized the Delmonico as a ribeye with the tail left on, and completely dismissed the notion of this bone-in Strip nonsense. However, in finding numerous menus and articles from reputable sources contrary to this belief, I kept digging, eventually finding some historical information on Delmonico’s itself.

The first two chefs, way back in the nineteenth century, both noted that the Delmonico steak was a tenderized sirloin or top loin steak, debunking the notion that it came from the rib. So as for when the name became synonymous with a rib cut, no one seems to be absolutely sure.

And now to really get things as clear as mud, I need to throw into the mix that the bone-in Strip Steak is also referred to as a Kansas City Steak or a Shell Steak, and sometimes as the Club Steak. But, “Club Steak” is nomenclature that is often used to refer to a Delmonico; I mean the Ribeye kind. AAAHHH!

Stop scratching your head. I am just as confused as you are. A great deal of time has traversed since Delmonico’s opened their doors in 1827, and things, I guess, have changed.

The steak most typically called a Delmonico is cut from the ribeye, with the tail attached. This is the common marketplace conception, and excepting a few high-end houses that might consider the rebirth of the classical Delmonico, the industry will remain steady in this mysterious masterpiece.

I was glad to have clarified this a little bit, as the History Major in me comes out. I don’t like running around spouting information off with nothing to back it up, so at least this time I can look you square in the eyes and say, “I’m really not sure what a Delmonico is, but at least I can tell you what 95% of the industry thinks it is.” Please, no need to thank me. That’s why I’m here. But don’t take this as gospel. I just wrote an article that pretty much states that I don’t know what I’m talking about.”

Paul G. Suplee CEC, PC III is a private chef, college professor, writer, photographer & blogger who breathes food. Active in the professional food service industry since 1983, he has worked in a number of locations across the United States. Paul now teaches adult students near Ocean City, Maryland after an interesting four-year career as a high school teacher. No disrespect to the food stylist world or that of the food writer, but what you see and read from him, love it or hate it, is what you will get at his table. No blowtorches, no crisco-ice cream and no molasses in place of natural glazing, either in photo or word.