Oysters are found all over the world today, indeed as they were in ancient history. Oyster shells have been found in ruins of the Australian Aboriginal people, the Celts, Romans, Greeks and also the North American Indians.  The Romans in particular were great oyster lovers, and it is said, that Julius Caesar was so fond of oysters, that he invaded Brittany (France) only to secure its by then already famous oyster beds. The Greeks carved their name in the shells and used them for balloting and crushed the shells to powder, which was sold as an aphrodisiac. 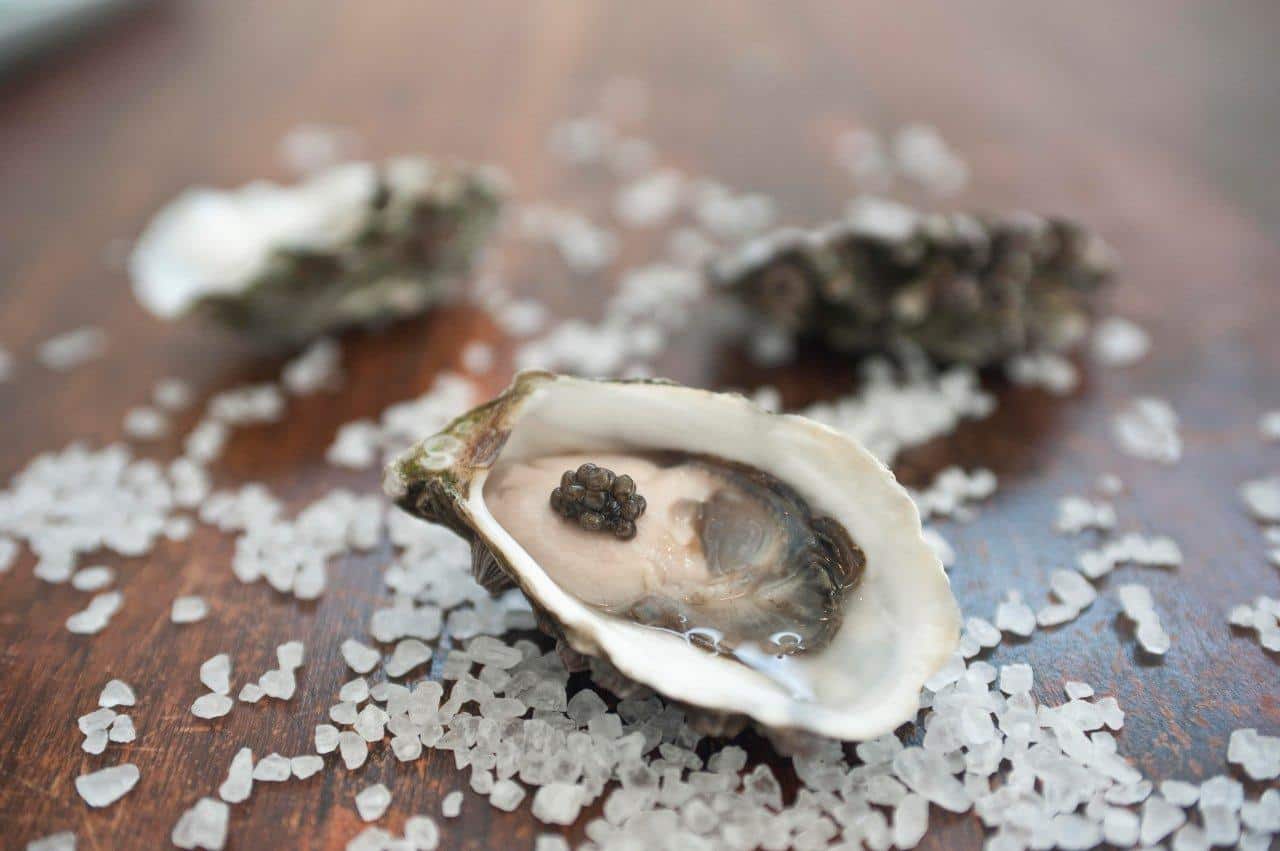 While in the old days natural oyster beds were plentiful everywhere, nowadays oyster farming is a lucrative business and big industry.

Although the Romans did farm oysters, at that time oysters were plentiful all around the world. In central and northern Europe, people mainly gathered fresh Belon oysters (Ostera edulis) right from the reefs off the coasts. During the 19th century, improved transportation started to take its toll on the natural oyster beds. The industrial revolution further declined the natural resources through the pollution of rivers and ocean waters.

In 1868 the vessel “Le Morlaisen” carrying a cargo of Portuguese oysters (crassostrea angulata) dropped anchor in the Gironde river on the Atlantic coast in Brittany (France). As the cargo of oysters began to die and rot, the port authorities demanded that the cargo was taken out to sea and thrown over board. Two years later oyster gatherers found flourishing beds of Portuguese oysters. A few of the abandoned oysters must have still been alive and started to multiply and grow.

The oyster industry in Europe flourished after that everywhere along the Atlantic coast, as these “new” oysters grew much faster than the well-known Belons. In 1960 however, the Portuguese oyster developed a disease and stocks began to diminish rapidly. There was need of a quick solution, and Canadian and Japanese seeds of the gigas oyster were introduced. Within a few years the gigas or “huitre creuse” as they are known in France (Fines de claires & Speciales ) replaced the Portuguese oyster.  Not only can the gigas oyster withstand dangers from man and nature, it also grows twice as fast as the flat Edulis oyster.

Life-cycle of an oyster

Oysters are bivalve molluscs, meaning they have no back bone but have an exoskeleton, hence the two shells, which surround a soft body. They feed themselves by filtering up to 5 litres of water through their gills and “sift” out plankton, algae and other nutrients. Oysters belong to the family of clams.  They have no distinctive brain and generally grow in seawater or brackish water in river mouths. Oysters have two strong inner muscles, one that closes the oyster and one that holds it tight. There are many different oyster species of which only a few are edible and the prized delicacy we all love.

Oysters reproduce by spawning in water temperatures of 22- 33 C. They begin when they are about 2.5 cm in length or 2 years old. From there on they spawn every year. Oysters are transsexuals in the sense that they may change their sex from one year to the other. The same oyster could produce eggs one year and spawn the next, although older oysters are usually females.

Not all oyster types fertilise their eggs the same way. Edulis (Flat or Belon) type oysters incubate their eggs during May to August, which is why these oysters should not be served during that period. The oyster meat gets very spongy and unpleasant, although not harmful, before releasing the larvae into the ocean in early September. Crassotrea oysters can be eaten all year long, as they release their eggs into the ocean in order to be fertilised. Very soon after the fertilisation, small larvae develop, and within a day, both a shell and a disc form to help with the swimming. After about 3 weeks only 1% of the original 70 – 100 million eggs produced, survive, and are now ready to “settle”. They sink to the ocean floor and secure themselves with a tiny foot on what ever they are grounded on. They are now not mobile anymore and are called “spats”.

The oyster’s survival depends very much on the availability of food and the absence of predators. Growth can be very variable as they only eat in specific water temperatures. Oysters prosper in bays and river mouths where the salty ocean water is diluted with fresh water. They like cloudy waters, which does not suit their enemies, mainly the starfish and a snail-like creature that bores holes in their shells. Oysters can live up to 10 years, American oysters even up to 20 years, although most eating oysters are harvested in between 1 1/2 to 3 years.

There are three basic types of oysters: Ostrea, Crassostrea, and Pinctada. The Ostrea Edulis oysters are the European species and include Colchester, Dutch Zeeland, Belgian Ostends, Marennes, and the French Belons. Flat oysters are also cultivated in Australia and the USA although in smaller quantities. The Ostrea lutaria or Bluff Oyster from New Zealand belongs to the same family of oysters as well. The green Marennes oyster takes its colouring from the algae, which forms its main staple.

Crassostrea oysters make up the biggest oyster family and are grown in almost every ocean. These include Crassostrea gigas (Japan, USA, Europe), most American Pacific oysters, as well as the Atlantic varieties (Crassostrea virginica), Crassostrea sikema (Japan) and Canadian oysters. They are also farmed in New Zealand and Australia (C. commercialis & C. cucullata), the Pacific coast of Central and South America (C. chilensis) and even in India (C. cucullata). One of the most famous types though remains the Portuguese oyster from Brittany in France, only grown there because of that “accidental” growing of oysters in 1868 as set out above.

Pinctada oysters are not really considered eating oysters, and are native to Australasia. Although they are not harmful for human consumption, they are more prized for producing pearls. These oysters react to a foreign object, which intrudes into their shell (sand etc.) by coating the object with a pearly substance. The inside of all oysters is lined with mother of pearl.

While in the old days natural oyster beds were plentiful everywhere, nowadays oyster farming is a lucrative business and big industry. There are a number of different methods of farming oysters in order to achieve a better quality and to satisfy the worldwide demand. The most common method is bottom sowing, where tiles are spread out in the sea to give the oysters more places to “set” on. Another method, especially popular in Japan, is sub tidal culture, where oysters are encouraged to attach to ropes or wires, which are suspended from a floating raft. This method brings up to 10 times the harvest of the tile method and oysters are ready for harvesting a year earlier. The rack method grows oysters on submerged trays or racks, which makes it very easy to harvest them, once they are grown.

Oysters are at their best if bought fresh and alive, but they can also be bought fresh in the half shell, frozen in half shells, bottled (meat only), smoked or dried. Whole fresh oysters should always be closed or close themselves immediately, a sign that the oyster is still alive. The oyster flesh should be plump, creamy or grey coloured, shiny and fresh smelling. The surrounding water should be clear. Oyster meat quality is determined by appearance, saltiness and fatness.  “Fatness” does not refer to fat or grease but rather to the volume of the oyster. Oysters are very low in cholesterol and rich in iodine and an important source of minerals such as calcium, copper and zinc.

Fresh oysters should be kept by 1 – 3oC, moist and in a tight basket or with a weight on top, to prevent them from drying out and opening.

Oysters have to be well rinsed with water before opening, to get rid of sand and dirt which surrounds them. To open, place the oyster on a flat surface with the flat side up and hold it tight with one hand. With the other hand force a sharp pointed small knife in between the two shells at the pointed end of the oyster. Lever the top shell off, run the knife along the inside of the top shell in order to cut off the muscle. Remove the top shell, loosen the oyster meat with the knife by cutting off the muscle underneath the meat and brush away all shell particles if necessary.

Serve oysters “au naturel” with lemon, shallot vinaigrette or any other
suitable sauce. Poached or otherwise cooked oysters should be heated very slowly and never cooked through. Oyster, which are cooked too long, are dry and tough to eat.

Keeping track of oysters is very difficult, as every Bay or region calls their oysters a different name, for the same species. The Latin generic name only, indicates the type of oyster and in some cases their original country of origin. However in today’s world of oyster growing and cross breeding, many oysters are grown outside of their original areas of origin. The chart below lists some of the more recognisable modern names and their generic names for reference: