What is the Best Salt to Use

In this short guide, we explain what is the best salt to use for various occasions. Salt comes in many forms and it can get hard to choose the right salt for your next meal.

Table salt is your everyday white granular salt found in most kitchens. It is most commonly mined from salt mines and then refined to remove other minerals until it is pure or close to pure sodium chloride.

Often you will find table salt referred to as iodized salt, this term refers to the fact that the manufacturer has added iodine.

This practice began in the earlier part of the last century in co-operation with the government to minimize the incidence of thyroid problems such as Goiter; an enlargement of the thyroid gland caused by an iodine deficiency. 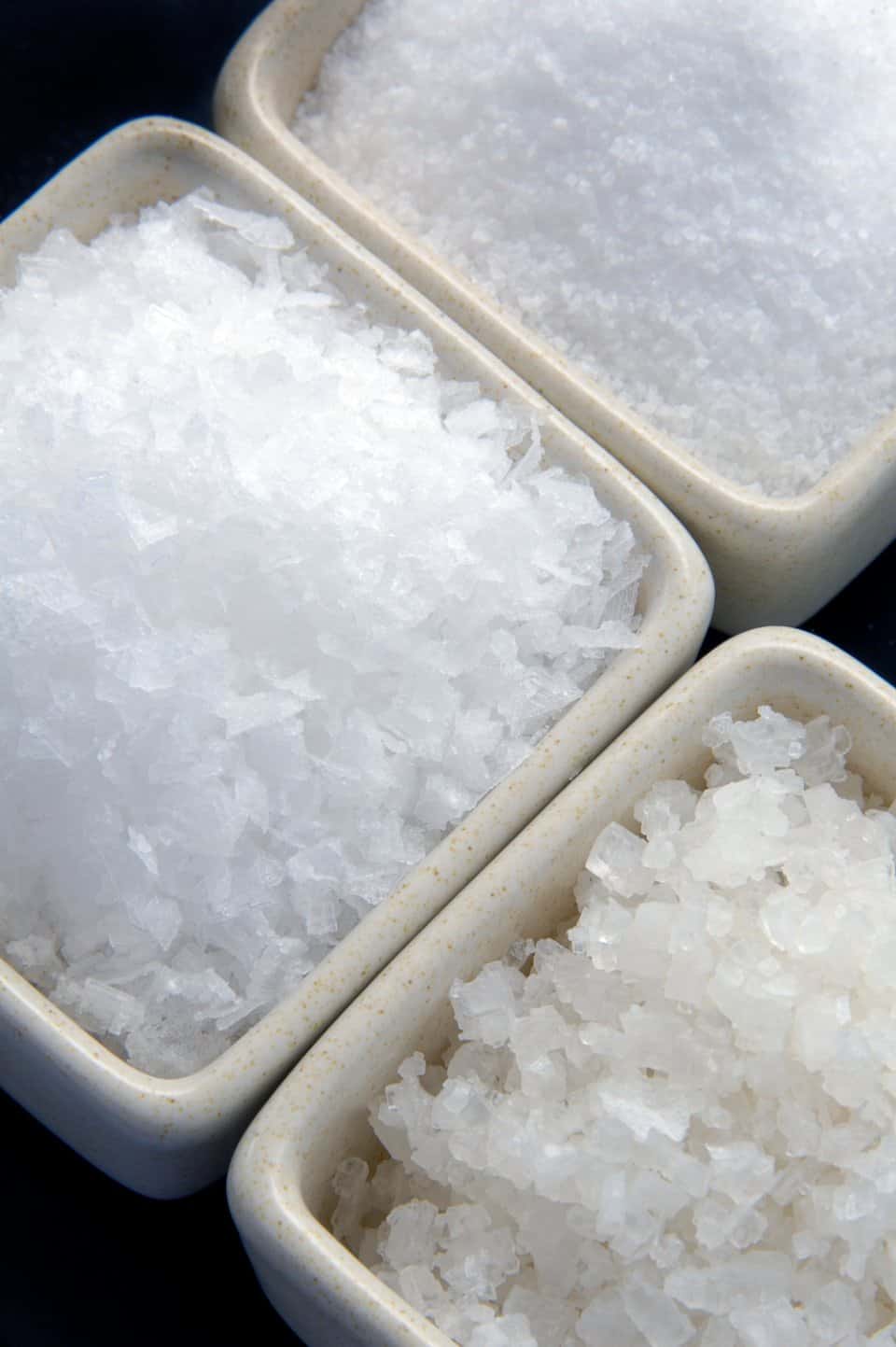 Is sea salt worth the extra cost? In my professional and personal opinion, definitely.

Rock salt is coarse and is usually mined from ancient salt deposits that are the result of very large bodies of water evaporating and leaving behind huge deposits of rock salt.

Rock salt is much less refined than everyday table salt and contains more minerals and often more impurities. Rock salt is good for cooking with and ideal to use in salt grinders.

I tend to use rock salt in blanching water as adding salt to water increases its boiling temperature and thus decreases the cooking time. I also use rock salt for presentation purposes such underneath oysters to keep them from falling over and visual appeal.

What’s the taste of rock salt: Rock salt can vary in taste depending on the region it is mined from and can possess interesting characteristics.

As the water evaporates salt crystals begin to form, the crystals are then allowed to settle, then removed, drained, dried and ready to use. Sea salt (as well as seafood for that matter) naturally contains iodine and supplementing, as often found in ordinary table salt is not required if sufficient amounts of either constitute part of your diet.

I tend not to use salt at the table as I believe if the Chef has done his job there should be no need for the addition of salt.

However should a guest request salt I will serve them only pure sea salt flakes. My personal preference for sea salt is that of the English east coast, a region that has been producing beautiful flaky white soft crystals for centuries.

What’s the taste of sea salt: When used in cooking it blends seamlessly with the food. When used at the table it imparts a slight saltiness without the brackishness or lip cringing effect of other salts.

A few flakes on the tongue and its oceanic origins become very apparent. Is sea salt worth the extra cost? In my professional and personal opinion, definitely.

Paul is a personal Chef to exclusive Sydney clients and is also our most frequently contributing writer. Paul was born in The Netherlands and moved to Canada at a very young age. Experience with traditional European meals at home and the diverse multicultural influence of foods in Canada gave Paul a great appreciation for different culinary styles. Over the years Paul traveled extensively and worked at every level of professional kitchens, from the deep fryer in the local burger joint, to the Head Chef in Five Star Hotels. He now resides full time in Sydney, Australia with his wife and their children. You will find his recipes emphasize natural, uncomplicated flavours and fresh ingredients such as those found in Mediterranean and South East Asian cuisines.