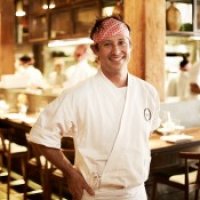 When Shaun Presland was asked to take on the role of Executive Chef & launch Saké Restaurant & Bar, the 40-year-old chef says the timing was perfect. After dedicating 15 years to perfecting his craft by learning the fundamentals in Japan & training intensively with world-class Japanese chefs, he was ready to make an indelible mark on the Sydney dining scene.

“[Owner] John Szangolies approached me early in 2009 & said he wanted to open a contemporary Japanese restaurant with a focus on creating first-rate dishes from sustainable produce & promoting shared dining,” Shaun explains. “I immediately knew Saké was the right place for me.”

Once he had accepted the role of Executive Chef at Saké, Shaun seized the opportunity to match outstanding Australian fish & produce with the premium range of Kozaemon sakes exclusive to the restaurant. “Our goal was simply to serve up fresh & vibrant cuisine & great sake,” he says.

The Sydney dining scene responded with great enthusiasm &, according to Shaun, the first year following Saké’s November 2009 opening was nothing short of incredible. “We had numerous highlights, including taking on a MasterClass & Celebrity Challenge on MasterChef – it was an inspiring experience & we had fantastic support from the show,” Shaun reflects. “And, of course, winning a Chef’s Hat was an absolute honour.”

The Saké Sydney team were rewarded with a coveted Chef’s Hat in the Sydney Morning Herald 2010 Good Food Guide Awards. “It was the ultimate recognition from the industry that we’re doing the best we could do, & it came about thanks to the combination of an amazing kitchen team & excellent floor staff,” says Shaun, who was equally as delighted when Saké retained its Chef’s Hat in 2011.

The restaurant’s enormous success also resulted in a sister venue opening in Brisbane. Renowned Noosa chef Shinichi Maeda, formerly of Wasabi, assumed the role of Head Chef, with Shaun presiding over the menu. “I completely trusted Shinichi to replicate Saké Sydney dishes with integrity, which he has done,” says Shaun. “& he has had the freedom to add in the flavours he is renowned for.”

Located within the buzzy Eagle Street Pier precinct, Saké Brisbane has been open since November 2010. “As with Sydney, our aim was to provide a great environment in which to enjoy the wonders of contemporary Japanese cuisine, & Brisbane has upheld this goal,” Shaun adds.

A third restaurant has now been added to the brand. Set within the revitalised Melbourne Arts Centre, on the Yarra River, Saké Restaurant & Bar Melbourne opened in August 2012, allowing Shaun to present his contemporary cuisine to a new audience. “We’ve been looking for the perfect Melbourne venue for a while & couldn’t be happier with the riverside location,” he explains. “It’s an exciting time & it’s been fun working with the new team to present dishes that incorporate local ingredients!”

“As well as working with three dynamic teams, it’s the ongoing learning that keeps me inspired,” Shaun concludes. “Having the chance to share new ideas with our customers is the great thing about doing a job I am completely passionate about.”

Share
Amaizu Make Amaizu by combining ingredients and stir until sugar dissolves. Can be refrigerated in a covered container for one month. Could also be used as an oil-less salad dressing....