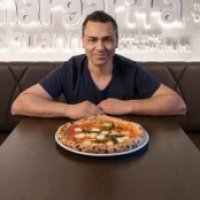 All posts by Johnny Di Francesco

When it comes to making the world’s best pizza, Australian Pizzaiolo don’t usually spring to mind – but one Aussie has changed that.

Known as “Mr Pizza” at home, Melbourne based Johnny Di Francesco was recently named the best in the world at The 2014 World Pizza Championships in Napoli.

Johnny’s passion for Italian cusine draws from traditional Neapolitan techniques, with his family originating from Naples.

And with a host of award wins and a number of successful restaurants under his belt, Johnny has established himself as a force to be reckoned with internationally.

On invitation, Johnny spent much of early 2014 overseas to represent his home country in several key pizza events. Judging and competing. Johnny visited Paris, Las Vegas and Parma to share his expert knowledge and put his unique stamp on the international pizza domain.

Johnny’s dedication to making world-class pizza has also awarded him the coveted position of Australasian Principal of V.P.N, an international association based in Naples that is dedicated to protecting and promoting authentic Neapolitan Pizza. Only two chefs in Australia have been awarded this honor.

Share
Pizza Dough In a bowl combine water and salt allow to dissolve. Add 10% of the flour and mix. Mix well; add more flour and the yeast. Continue to add...