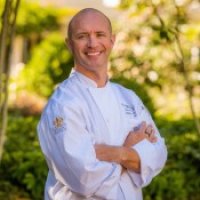 Chef Colin Bedford’s exceptional menus have won over loyal diners at Fearrington House, and won critical acclaim, including The Fearrington House nationally ranking as No. 2 of the top 40 hotels in the south, No. 5 in the US and No. 24 of the 100 hotels in the world (Condé Nast Traveler), one of the top hotel food destinations in the world (Condé Nast Traveler) and, locally, a Gold Medalist restaurant in 2011 and 2012 (Raleigh News & Observer). The Fearrington House Inn and Restaurant are also one of only two inn and restaurant combinations in the U.S. to have the Forbes Five-Star and AAA Five Diamond award for both, totaling 10 stars and 10 diamonds. In 2012 Chef Bedford was named a Relais & Chateaux Grand Chef and he was invited to cook at the annual Relais & Chateaux Grand Chef Dinner held in London, England in April of 2013. Chef Bedford was also nominated as a James Beard semi-finalist for Best Chef in the Southeast in 2014.

In his six years as Executive Chef at Fearringon House, Chef Colin Bedford has tirelessly shaped all aspects of culinary offerings: among them, grand-scale wedding receptions; cookbook author lunches and evening events with traveling chef/authors; gastro-pub fare at the casual restaurant, The Fearrington Granary and our beer garden, Roost; individual room service; and most notably, at The Fearrington House, one of the most venerable farm-to-fork restaurants in the South.

Chef Bedford’s menu inspirations are an interplay of the legendary culinary traditions of the American South, local ingredients, his own English roots, and, not least, his genius in technique and taste.

Chef Bedford is equally adept with directing the creation of house-made jams and house-cured meats, baking of breads, and growing of micro-greens as he is foraging on the Fearrington gounds for herbs and figs. His work involves such wide-ranging responsibilities as scouting for local produce, hams, and rabbits as well as sourcing and inventing menu courses with choice exotic ingredients.

Under Chef Bedford’s leadership, ‘the House’ has benefited from an unprecedented level of collaboration between not just the kitchen staff, but also with the wait staff and wine staff. For example, when each seasonal menu is put together — with Chef Bedford working with his top lieutenants Executive Sous Chef Tom Whitaker and Sous Chef Tom Card and with Wine Director Max Kast — the entire restaurant team joins in a full day of training and feedback, with Chef Bedford leading the way.

Anyone who has chatted with 34-year-old Bedford might quickly guess he grew up in England. Bedford’s culinary interests started at an early age, he says, enamored by his mother’s home baking and helping his father water the vegetable garden. After graduating from Yeovil College in Somerset with a Diploma in Hospitality, he took on his first full-time job in 1996. He became an apprentice at The Castle Hotel, a Norman fortress built in the 12th century, where he worked under esteemed British chef Phil Vickery. The Castle, like Fearrington, is a family-run property, known for fostering up-and-coming chefs.

In 2000, Colin relocated to Canada and began working at The Prince Of Wales Hotel, a Four-Diamond CAA/AAA restaurant offering a la carte dining and conference/catering facilities in Niagara-on-The-Lake, Ontario. He was soon promoted to the position of Junior Sous Chef, where he gained exposure to farm to table cuisine and realized that, as he says, “simplicity is key to maximizing flavors.”

Share
The Hot Chocolate Soufflé has been a staple at The Fearrington House Restaurant since Chef Edna Lewis led the kitchen. I committed myself to maintaining the character and charm of...