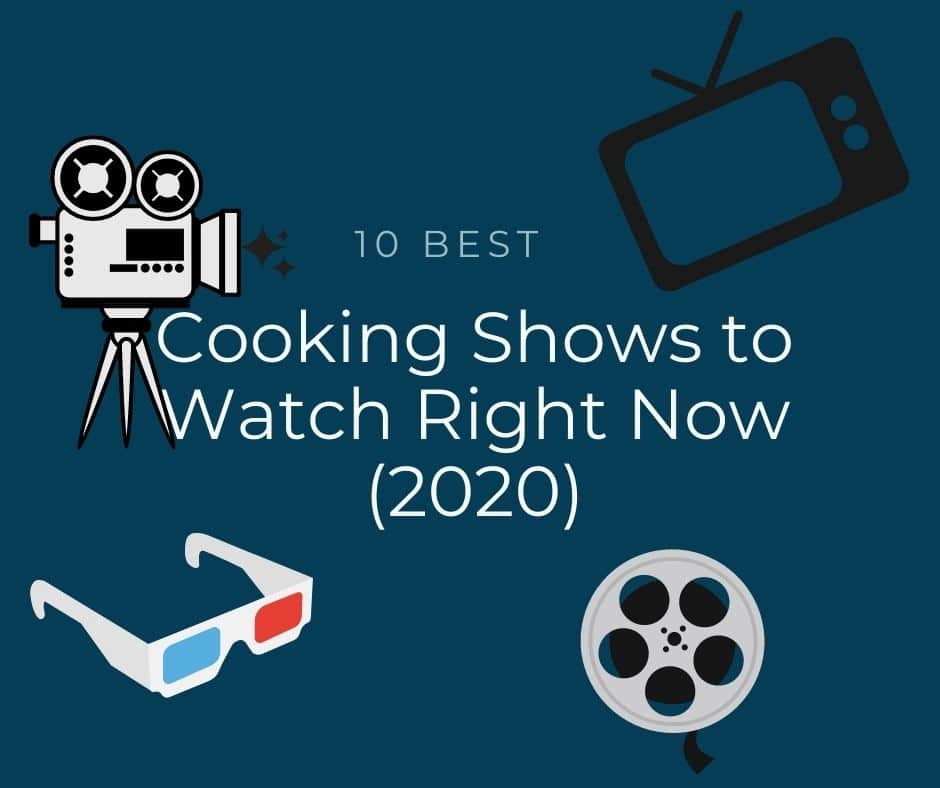 Some say cooking is an art, while some see it as a craft that you can hone and finally succeed at. One thing is for certain: we’d all like to cook perfect cakes and perfect boeuf bourguignon, and most of all, we wish we had more time to do it.

If you feel like you don’t have either: skill or time, what better way to enjoy food without feeling a tad guilty about calorie intake than watching some of the best cooking shows in 2020.

Whether you’re a fan of cookies, cakes, Italian, or French foods, I’ve done my best to cover them all and give you some of the most scrumptious, and hilarious visuals for a great passing the time.

Without further ado, here are the 10 best cooking shows to watch right now.

A PBS trademark, Dishing with Julia Child, may be a fairly new show; however, home cooks will enjoy the series’ outlook on Julia’s life and cooking legacy.

Every episode features an interview with a world-acclaimed chef who has been, in one way or another, inspired by Julia Child’s cooking tools, techniques, and French dishes.

Martha Stewart, Jose Andres, and Marcus Samuelsson are just a few of the chefs that you’ll meet in this show. If you’d like to see more of Julia’s talents in the kitchen, I also recommend her show, The French Chef.

Cakes and teas are a must when watching The Great British Baking Show that started in 2010 on BBC. After gaining notoriety, the show captivated US audiences, and now it’s also available on Netflix. Over the years, the show has had its fair share of hosts, the current presenters being Noel Fielding and Matt Lucas.

In each episode, a group of chefs gather at an enchanting English estate where they unleash their creativity and passion for making various culinary delights, which usually ends with a giant mouth-watering dessert. If you’ve never seen the show, come to the cakes, lovely tea, and a friendly atmosphere!

Welcome to the show where colorful language and losing your temper are a culinary trademark! Chef Gordon Ramsay trains and pushes his contestants to the edge of sanity, making them work under pressure in real restaurants to deliver exquisite food to the customer’s satisfaction.

Since it been on the air, Hell’s Kitchen has been nominated three times for a Primetime Emmy in Art Direction, and it’s no wonder! Suspense, desperation, criticism, and excellent food are the main qualities of this show. It will keep you on edge, and it will entertain you like no other. Welcome to Hell’s Kitchen!

Ugly Delicious is available on Netflix and stars David Chang, who’s on a quest to explore different dishes and experience cultural differences that make each one unique.

What makes this show stand out from the rest is David’s approach: he takes basic food items such as pizza or chicken to see how people from different countries integrate them in their country from a cultural perspective.

Ugly Delicious will certainly challenge your notions of food and culinary delicacies like no other!

While everyone loves a fierce cookoff between chefs, there’s something special about watching amateur cooks have a go at preparing delicious desserts. One of the best things about this Zumbo’s Just Desserts is the decorative space, which looks like a house made entirely of sweets!

However, don’t be fooled by the ‘sweet’ appearance, competition is fierce, and the contestants don’t miss their chance to smack talk one another during the bakeoff. If you’re looking for a colorful, entertaining show, Zumbo’s Just Desserts is your next stop!

Nailed It! is currently available on Netflix, and it’s one of the best shows to keep you company on a cozy evening. What makes this show different from the rest is its light-hearted approach.

Each episode features three amateur bakers who need to create a dish from scratch. The contestant who fails the least is the winner. The hosts are comedian Nicole Byers and pastry chef Jacques Torres. Nailed It! is a show that will make you cry with laughter every time!

With such an unconventional title, we can only expect an unconventional show, and that’s exactly what we get. Salt, Fat, Acid, Heat is definitely one of the best cooking and travel shows that follows the New York Times Magazine food columnist, Samin Nosrat, in her food travel journeys across the world.

In her travels, she talks about the different elements of food that are crucial to make delicious dishes. Most of us might agree that Salt, Fat, Acid, and Heat are the perfect elements to make the perfect food serving.

8. The Curious Creations of Christine McConnell

This show is a doozie! We may have described some shows on this list as unconventional, but this one takes the cake! Pun intended.

While the term ‘curious’ might be an understatement, in this show, we see Christina create some hauntingly yet beautiful creations: a cake that resembles a wolf’s head, anyone?

The best way to describe this show would be ‘Martha Stewart meets the Addams Family’, which, trust me, is spectacular and nothing to shy away from!

Another great thing about The Curious Creations of Christine McConnell is that it has a single narrative plot all through the entire season.

Speaking of unconventional, I would like to add one more unorthodox show to this list: Cooking on High, which is pretty self-explanatory.

Foods and cooking should be fun and creative, and what better way to do it than when you’re actually stoned. Yes, the contestants in this show use their favorite ingredients while chilling and have a jolly old time!

This one may be an oldie, but it’s still a goldie. Marc Summers, the host of Unwrapped, strives to uncover the origins behind America’s top favorite foods. The show has had more than 20 seasons, and he analyzes everything from the popular Tootsie Rolls to the classic saltwater taffies.

One of the best things about this show is that you get a look at how your favorite foods are made and how they’ve been improved over time.

While the original series ended in 2011, it was later relaunched and hosted by actor Alfonso Ribeiro on the Cooking Channel.