What’s the Best Cocoa Powder According to Pastry Chefs 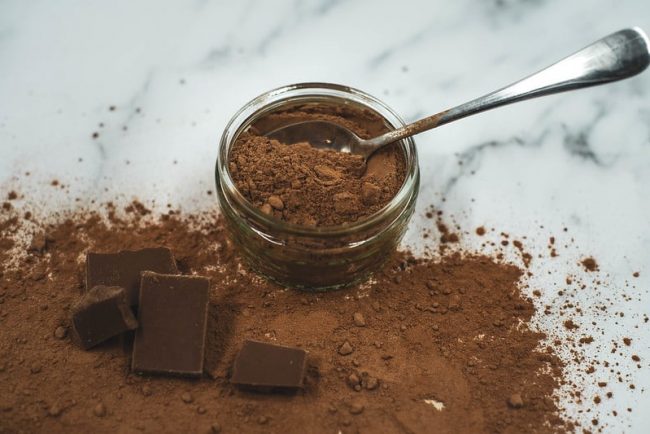 Cocoa powder, known as “food of the Gods” in the Maya civilization of Central America, is a well-known dessert ingredient and superfood. Obtained from the seeds of the Theobroma cacao tree, also known as “the chocolate tree”, cocoa powder is a solid that results from grinding the seeds after the cocoa butter is extracted.

Cocoa powder and cocoa butter are the key ingredients of one of the most loved foods on the planet, chocolate, which gets its melting texture from the presence of cocoa butter.

The powder is rich in flavonol antioxidants, substances that turn it into a superfood, but are partially lost when the cocoa powder is processed.

The Cacao tree is native to Central America and only grows close to the Equator. Mayans domesticated the Cacao tree 5,000 years ago and considered the plant a gift from the gods. To them and other pre-Columbian civilizations, cocoa was both a ritualistic drink and a currency. After Europeans discovered cocoa and chocolate, their appetite led to an increase in the number of cocoa plantations, both in Central and South America, but also in Asia.

Nowadays, the largest cocoa producer is the Ivory Coast, followed by Ghana, and Indonesia. Obtaining cocoa powder is a long and complex process, as it requires several stages: harvesting the pods, fermenting the pulp (also known as “sweating”), fermenting and drying the beans, then roasting them.

At this stage, which is usually done in factories, the beans can be ground into the so-called “chocolate liquor” (cocoa paste), from which chocolate can be obtained directly. Also, the cocoa paste can be separated into cocoa butter and cocoa powder, and processed further.

A very distinct stage in the processing of the cocoa beans is treating the beans with alkali, which results in Dutch-processed cocoa powder. This is less acidic, darker, and has a milder flavor compared to natural cocoa, which is acidic, has a lighter color, and a stronger flavor.

Because of the chemical process involved in obtaining it, Dutch-processed cocoa behaves differently while cooked. As it has a neutral pH, when combined with baking soda, it will stop the batter from rising, keeping it moist and fudgy. When cooking with natural cocoa its acidic quality allows the batter to rise, resulting in airier, but drier baked goods.

There are countless brands of cocoa powder and choosing one depends on several factors, such as budget, nutritional recommendations, type of dessert, and, of course, professional chef recommendations.

Overall, choosing a cocoa brand is much more than a matter of taste, but rather a matter of learning what is best suited for different types of food and different nutritional needs.

Valrhona is one of the most renowned chocolate producers in the world. The French company was established in 1922 by Pastry Chef Albéric Guironnet, who wanted to produce the best artisan chocolate, balancing flavors and texture. Today, Valrhona is the brand of chocolate and cocoa powder used by many pastry chefs and chocolatiers.

The Cocoa Powder, available on Amazon, is Dutched cocoa, with an enhanced flavor and color, and it is best used for truffles or chocolate cream. However, some users also report using Valrhona cocoa powder for brownies or chocolate cake, which turn out to have a stronger flavor. It has a very rich taste and gives a velvety texture to any dessert but without the bitterness usually associated with such intense-tasting cocoa.

It is recommended by many award-winning pastry chefs, some of which have also been featured as guest chefs at L’Ecole Valrhona in Brooklyn. Some of these are Antonio Bachour, named Best Pastry Chef in the world at the 2018 Best Chef Awards, Spanish Pastry Chef Oriol Balaguer winner of Grand Prix au Chef Pâtisser, 2018, and Chef Ron Ben-Israel , owner of Ben-Israel Cakes, a well-known couture cake studio in Manhattan.

Another cocoa powder and chocolate brand which is highly sought-after by many pastry chefs and chocolatiers is Callebaut. A Belgian company with a long history behind it, Callebaut works with cocoa farmers in Ivory Coast, Ghana, and Ecuador, using only traceable cocoa, and thus making sure all farmers obtain fair wages and no child labor is used in harvesting the cocoa. Every pack comes with a QR code and a unique batch code number, which tells the story of the cocoa beans used in making the product.

As it is Dutched cocoa, it is mostly recommended for non-baked products, but many users say that they have used it for any kind of product that requires cocoa in the recipe. It has a deep, intense cocoa flavor and a dark color. Callebaut cocoa powder and chocolate are endorsed by famous chefs, such as New York’s Swedish chocolatier Håkan Mårtensson , owner of Håkan Chocolatier, Savourschool’s Pastry Chef Kirsten Tibballs, and Pastry Chef Francisco Moreira.

Ghirardelli Cocoa Powder is another well-known brand, produced by the American company Ghirardelli, currently a division of the Lindt & Sprüngli Swiss confectioner.

One of the few companies with a very strict cocoa bean selection process for making cocoa powder and chocolate, Ghirardelli controls every aspect of their chocolate manufacturing process, by processing the cocoa beans, and producing chocolate and cacao solids, like cocoa powder.

The Majestic Premium Cocoa Powder has a high cocoa butter content (20-22%) which gives it a very silky texture, as it is obtained from alkalized nib cocoa. The producer recommends using it for baking and beverage applications.

Users describe it as being the creamiest of all Ghirardelli powder cocoa types, very well suited for decadent chocolate desserts. Ghirardelli chocolate is recommended by Chef Rakhee Vaswani from U.S Consulate General Mumbai for a Ghirardelli Chocolate and Oregon Hazelnut Brownies recipe, as it has an intense flavor and rich taste.

Cacao Barry is a French company, currently Swiss-owned alongside another famous chocolate company, Callebaut. Initially, Cacao Barry was founded in 1842 by Charles Barry, who traveled to Africa to seek cocoa beans that would help him create a connoisseur’s chocolate.

Later, the company became a so-called “bean-to-chocolate” company, meaning that it purchased its cocoa beans and processed them with no outside intervention. A Dutched cocoa, Cacao Barry Cocoa Powder is recommended by its producer for mousses, creams, ice-creams, sorbets, confectionery coverings, and decorating.

Most reviewers also use it for baking and praise its silky quality, rich flavor, and deep color. Recommended by international chefs such as French chef Philippe Marand, ambassador of Lenôtre in premiere chocolaterie and pastry events and Belgian chef Erik Van Der Veken, Cacao Barry Cocoa Powder is also well suited for high-end bonbons and truffles.

For low-carb cocoa powders, there is a lot to take into account. Although many brands don’t have any added sugar, cocoa powder naturally contains small sugar quantities.

With cocoa powder, the richer the taste, the more fat can be found in the product. During recent years, nutritionists and dieticians have begun to recommend natural cocoa powder, made from fermented, dried, and unroasted cacao beans.

Sometimes, this is called “cacao”, but the use of the term is inconsistent, as many products labeled as such are obtained from roasted cocoa beans. The claim that “cacao” has more antioxidants and minerals than roasted products has not been sufficiently backed up by scientific studies. Therefore, there is no actual evidence that raw cocoa has a higher nutritional value than roasted cocoa. Ultimately, it all comes down to taste and budget.

A natural cocoa powder, non-alkalized and unsweetened, Cadbury Bournville Cocoa is suited for vegetarians and made in compliance with Fairtrade Standards (requirements specific to cocoa producers and traders).

Recommended for having a low carb percent (14 g), it is also presented as very good for cooking. Some people adds this cocoa powder to coconut milk, almond milk, and heavy cream for a Keto-friendly hot cocoa.

Probably one of the best rated raw and organic cocoa powders on Amazon, the Pure Natural Miracles Organic Raw Cocoa is recommended for vegan, keto, paleo, sugar-free, and dairy-free baking.

According to Amazon buyers, it has a strong flavor and blends perfectly with batters and liquids, making it very similar to processed cocoa. The Pure Natural Miracles cacao only comes from Ecuador, unlike most cocoa powder brands, which are mixtures of several cocoa types. Also, it contains a higher quantity of cocoa butter, which means a denser texture and a richer flavor.

Hershey’s is probably one of the best-known cocoa brands in the U.S. Unsweetened and non-alkalized, it can be used both for making hot cocoa or for baking, as presented on the box. As it is not processed, this type of cocoa is rich in flavanols, which are anti-oxidants. However, some users find the taste to be too bitter and not flavored enough.

Both Cadbury and Nestle brands are owned by Hershey, so they sell the same cocoa. For a more exquisite taste, we recommend an European cocoa brand.

Still, for someone looking for a budget-appropriate cocoa brand, Hershey’s is a convenient choice.

Corina is a content writer and blogger with a passion for food and traveling. With over 16 years of experience as a copywriter, content writer, and localization specialist, she has a knack for writing about entertainment and a passion for tech. A foodie and travel enthusiast, she likes to explore everything food-related in her travels and discover traditions and authentic products.