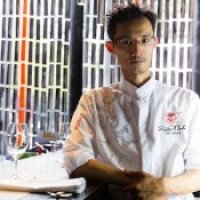 All posts by Raita Noda

Chef Raita is originally from Roppongi, in Tokyo. He moved to Australia when he was 15 years old because his parents decided to resettle from Japan to Australia. He’s been living in Australia ever since and works with his son and apprentice, Momotaro Noda at his newly opened restaurant: Raita Noda Chef’s Kitchen.

From Executive Chef at Ocean Room, Chef Raita opened this intimate restaurant in Surry Hills that seats a maximum of 8 people.