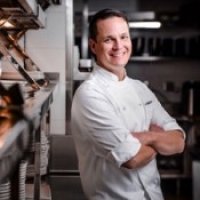 All posts by Mike Rakun

At the intersection of fine dining, local foodways, and healthfully nuanced cuisine, the Twin Cities find Mike Rakun. Executive chef and partner for Marin in downtown Minneapolis and Mill Valley Kitchen in St. Louis Park, MN, Rakun works with a network of regional purveyors to bring the Heartland’s best foods to the plate and even takes the bold move of printing the nutritional information for the entire menu. His fun, flavorful, health-conscious approach has earned him a devoted, loyal, and ever-growing fan following.

After moving to Minnesota and attending Le Cordon Bleu College of Culinary Arts, the Chicago native took on an intense and rigorous internship at The Saint Paul Hotel, at which his enthusiasm, creativity, and drive helped him earn a full-time position and ascend through the ranks. He went on to open Mission American Kitchen in Minneapolis, under the direction of executive Chef Jordan Smith, playing an integral role in building the restaurant’s initial menu and eventually becoming executive chef, a move that gave him the opportunity and the freedom to further explore the world of food and express his creativity. After a three-year stint in Florida to serve as executive chef and eventually partner at Truluck’s, a steak and seafood restaurant complete with its own fisheries and fleet of fishing boats, Rakun returned to Minneapolis to help mentor and friend Smith open Black Sheep Pizza.

In 2011, Rakun formed a partnership with Craig Bentdahl to develop Mill Valley Kitchen, featuring Northern California-style cuisine in a friendly, casual neighborhood eatery. Bentdahl and Rakun again teamed up to develop Marin in 2013, serving a more sophisticated menu with an innovative and expansive bar and wine program, presented in a comfortable and refined downtown setting.

Rakun lives in the Kingsfield neighborhood of Minneapolis with his wife, Abby, and three kids. He’s an avid golfer and also loves to get the family outdoors whenever he can for going to a cabin for some fishing, hiking, and boating.

Share
Saute garlic and shallots in bran oil, add potatoes, corn, jalapeno. Finish with lobster and herb. Season with lime and salt and pepper to taste. May also need stock to...