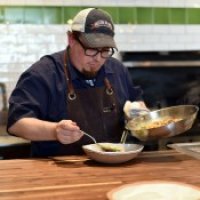 All posts by Kevin Adey

Kevin Adey opened Faro in early May 2015 to showcase seasonal cooking and the art of pasta with a menu focusing on housemade pastas, organic produce, sustainable local seafood and Animal Welfare Approved meats.  Faro, which means lighthouse in Italian, is a passion project for Kevin and his wife, co-owner Debbie Adey (Jean Georges restaurants), who together with partner Daniel Blumberg have created an ambitious yet comfortable and affordable neighborhood restaurant that’s serious about sourcing and cooking food, drink and service – a beacon for culinary goodness.  During the five years he served as Executive Chef of Northeast Kingdom, Kevin built a following for his seasonal cooking and devotion to locally sourced, sustainably raised and harvested ingredients.  A native of Upstate New York, he lived and worked in Florida before returning to New York and joining the kitchen team at Le Bernardin.

Share
Duck and Honey Butter Preheat the oven to 400 degrees Fahrenheit. Toast the fennel seed, coriander and star anise in a dry pan. Once toasted, add the butter and stir...