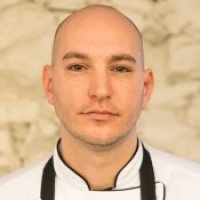 As executive chef of Grace Vanderbilt and The Vanderbilt Grill, Anthony Theocaropoulos oversees all culinary operations and programming at the hotel. Specializing in Mediterranean and Italian cuisine, Chef Theocaropoulos incorporates locally sourced seafood into his classic and contemporary sea-to-table dishes and aims to provide an approachable, fine dining atmosphere that serves flavors that are new to Newport.

Chef Theocaropoulos received his education at the Lincoln Culinary Institute in West Palm Beach, where he was trained in culinary arts and international cuisine. Beginning his career with Café Boulud at The Brazilian Court Hotel before returning to his roots in New York City, Chef Theocaropoulos worked for top restaurants in Manhattan, including Eataly and Ai Fiori, in addition to opening his own restaurants in Brooklyn and Palm Beach. He was particularly influenced while working under Chef Michael White, who is one of his biggest mentors and guided Chef Theocaropoulos to refine the cooking style he is so well-known for today.

Chef Theocaropoulos uses his love for cooking to help him unwind in his free time. He often makes pasta dishes at home, which he finds therapeutic after a busy day in the kitchen.

Share
Octopus Bring all ingredients together in a large pot until you have a rolling boil. Submerge octopus and continue to boil for 3 minutes. Lower heat to a slow simmer...