Coffee is perhaps not the first thing that comes to mind when thinking of Vietnam. The truth however is, that Vietnam today is one of the largest exporters of coffee beans in the world. Mostly “green” or raw, un-roasted Vietnamese beans are traded on commodity markets, and in recent years the world has taken note of Vietnam as a coffee country. 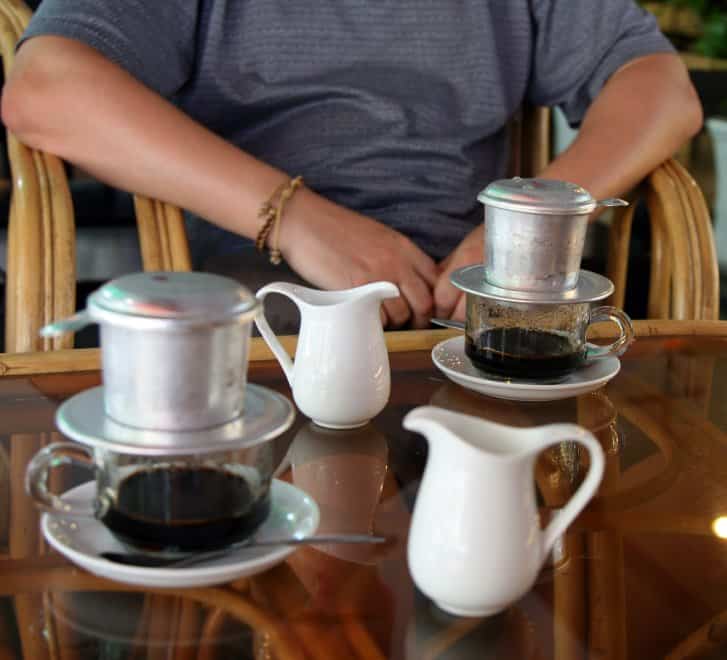 The Vietnamese coffee recipe is simple as well, but it needs that secret ingredient called patience.

Coffee as a crop was introduced and very successfully grown in Vietnam in the late 19th century during the French occupation of the country. Especially in the central highlands coffee seems to thrive very well and these highlands supply the bulk of Vietnam’s coffee crop. In recent years, increasingly, roasted beans and unique bean blends have gained recognition throughout the coffee world for their richness and distinct flavors. While Robusta beans make the largest amount of harvested beans in Vietnam, Arabica, Excelsa (a.k.a Chari) and Liberica and some heirloom varieties are successfully grown as well.

The trend of creating 100% Arabica bean bends only has reversed somewhat and experts are looking for diversity with bean blends and the roasting of it to create different and new, unique flavors of coffee. Although Robusto beans are often considered “second rate” most coffee experts agree that a blend of beans can result in very distinguished flavors and tastes and Robusta beans must be part of a good Espresso mixture. As coffee house chains around the world actively look for new and different ideas they have taken note of Vietnam as an “coffee country” both with its brewed coffee specialties as well as coffee blends that reflect the large variety of coffee beans grown there.

Coffee is a very universal beverage although most Asians are traditionally tea drinkers. During the last few years however, Starbucks, Seattle’s Best and many other coffee chains have made their mark especially with the younger generation of Asians. In Vietnam drinking coffee is as widely enjoyed and practiced as drinking tea. Drinking coffee, introduced during the time where the country was a French colony, is deeply rooted in today’s society. Young and old sit, at anytime of the day, anywhere from one of the many fancy colonial-European cafés, to the new modern coffee shops very much in the style of Western coffee chains, or just simply on the sidewalk, or in a nook outside a shop, to enjoy their coffee. Anything from three plastic chairs (two to sit on and one that doubles as a table) in front of a make shift newspaper stand or cigarette sales counter is just great to read the news, catch-up on gossip, watch the world pass by or simply cool oneself with a Vietnamese Ice Coffee.

The Vietnamese coffee recipe is simple as well, but it needs that secret ingredient called patience. It can not be rushed nor is it available at drive through windows. One needs to sit down, pour the hot water into the “phin” filter and while waiting for the coffee to brew, there is time to relax and reflect on the days activities. Here are the other key ingredients:
• A uniquely blended, fairly bitter, medium roasted Vietnamese coffee in a medium to coarse grind (generally the same grind as used for French pressed coffee).
• A glass or cup with condensed milk, about one ¼ to ½ of the quantity of the coffee that is to be added (this can be caged on the size of the filter).
• A filter (called “ca phe phin”), typically out of stainless steel, for as single serving, placed on top of a cup or glass. 1 – 1 1/2 teaspoon of ground coffee added to the filter and then lightly pressed with a little stencil which is left in the filter.
• Boiling hot water is poured into the filter and the brewed coffee is dripping directly into the cup below with the added condensed milk.
• For Iced coffee the finished coffee is stirred and then poured over a larger glass loosely filled with ice cubes.

More and more coffee lovers have discovered Vietnamese coffee, its little single-cup filter, and the rich, dark cup it produces. Vietnamese “style” of coffee refers to treating the brewing and enjoyment of coffee as an event, not just a commodity that you grab at a take-away place on the way to work. The minute of peace, while the coffee in front of you is brewing, might just be what the doctor ordered. Time to reflect on the days preceding or take that needed breather that brings order to ones thoughts and lets one move on after the break fresher and rejuvenated.  Vietnam, the only real “coffee country” in Asia, certainly is able to make its mark in the world of coffees. The dark, rich, smooth non acidic Vietnamese coffee blends and roasts, produce Vietnamese coffee specialties, different but certainly just as enjoyable as anything that might be considered coffee culture in Europe or elsewhere.