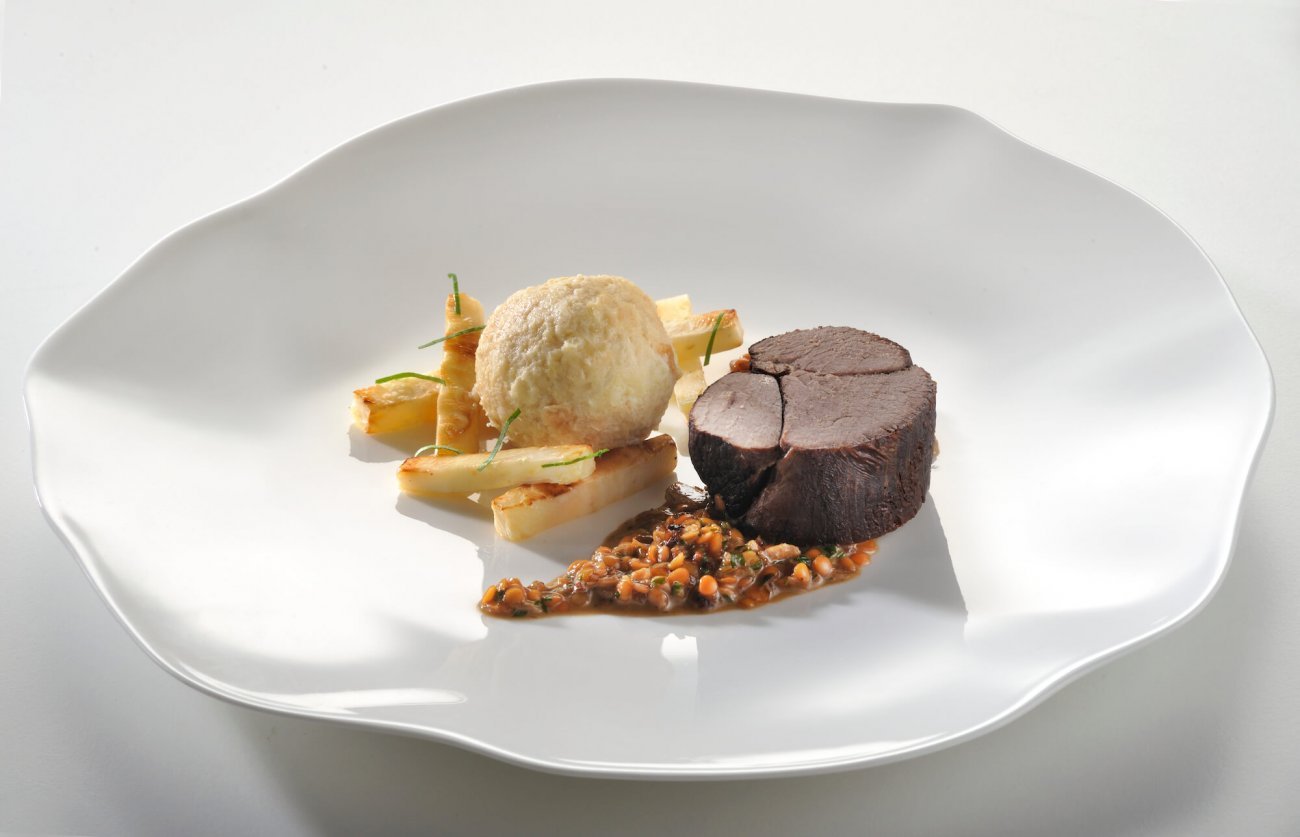 This wild boar recipe is brought to you by award-winning Austrian chef Toni Mörwald. The official name of the recipe is braised leg of wild boar with lentil and bacon sauce. The dish is served with parsnips and palffy brioche-dumplings.

Toni Mörwald, born in 1967, having grown up in sunny Feuersbrunn am Wagram as the son of the farmers and winegrowers Anton & Erika Mörwald, Toni was steeped in nature and in the production of wine, food and fine cuisine from an early age, and it was there he experienced the cycles of the landscape & region. He learned from numerous grand chefs around the world. At the age of 22 he was awarded his first Gault Millau toque and from then he expanded his activity to other restaurants, a catering business, two hotels and a culinary school while dedicating himself to the training of more than 300 professional chefs. These cooks are now working around the world, where they hold the top jobs in some of the finest restaurants.

Toni Mörwald was nominated Cook of the Year in 2004, entered the list of the Relais & Châteaux Grand Chefs in 2006 and was named “Euro Toques Master Chef” in 2008. He teaches cooking and gives advice on cooking on Austrian radio and TV. Over the course of the years the MÖRWALD GROUP has become increasingly involved in exciting hotel & restaurant projects and has continued to open its own restaurants.

1994 Restaurant Grafenegg Castle & Schloss.Stube with Bar and the Castle Terrace

1997 Mörwald A la Carte – a magazine for gourmets. Elected president of the restaurateurs’ organisation BÖG

1999 Hotel Villa Katharina opened across from “Zur Traube”: “Life in the Vineyards”

2000 m.kunst.genuss in the Krems art district goes online as well as the Church of the Friars Minor (Minoritenkirche) in Stein

2000 Mörwald in the Ambassador opens in Vienna, two Gault-Millau toques

2001 m.mensa.genuss at the Danube University in Krems opens a new gastronomic world

2002 m.office.genuss at the head office of PricewaterhouseCoopers in Vienna

2003 m.hitradio.genuss in the ö3 Building opens on 18 August

2004 Restaurateur of the Year

2006 Honoured internationally by being listed among the Grands Chefs de Cuisine in Europe 2006 Publication of the book “Die Schnelle Küche” (“Fast Food”), Donauland

2006 The new TV Cookery Programme on TW1. So schmeckt Österreich (“The Taste of Austria”) 2007 Cookery Book Roast Pork with the Ministry of Health