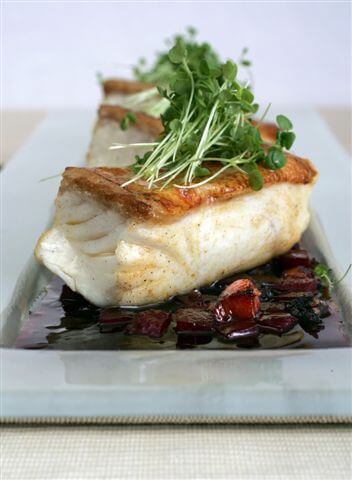 Derry Clarke, has been Chef/Patron of l’Ecrivain for over 29 years. He started his career in The Man Friday in Kinsale under Peter Barry in 1972 and moved to Dublin in 1977. He then spent four years in le Coq Hardi and a further eight years in the Bon Appetit before opening his own restaurant in July 1989 with his wife Sallyanne.

Derry and l’Ecrivain have been awarded many accolades over the past twenty years, including a Michelin Star which was awarded in 2003.

Derry promotes the use of Organic Food & Non Genetically Modified Foods. Derry’s food ethos is simple. He uses the finest of fresh local produce; he believes that a good dish can only be produced when each & every ingredient used for the dish is of the highest of quality. This is why he spends so much time sourcing his ingredients.

He likes using smaller organic and artisan producers, and is very keen on the promotion of indigenous products. Derry believes in keeping food simple. He will not use more than four flavours on the one dish. Derry and Sallyanne are constantly up-grading and changing everything at l’Ecrivain Restaurant to ensure they are offering the very best of Food, Wines and Service at all times.