A SWEET WALK THROUGH THE GARDEN 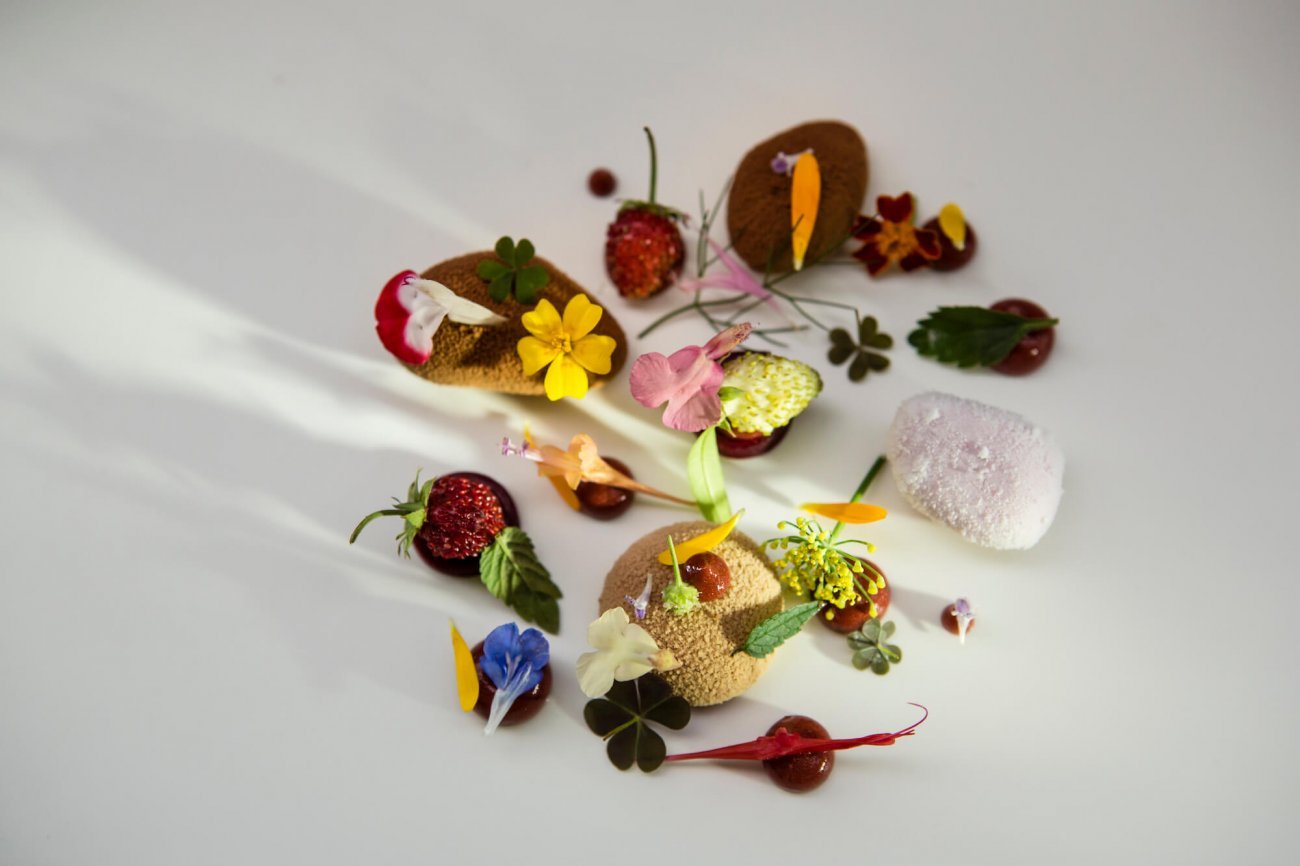 Gert De Mangeleer took over Hertog Jan with his culinary soulmate Joachim Boudens in 2005. Building on his previous experience working for top chefs in Belgium, Gert transformed the restaurant’s traditional and conventional kitchen into something more refreshing – perhaps even revolutionary. Focusing on the ways flavours, structures and contrasts take shape, Gert makes sure that his dishes touch all the senses and carry his signature style. In 2006 Hertog Jan was awarded its first Michelin star, followed by a second in 2009 and ultimately a third in 2011. Earlier this year Gert received the “European Chef of the Year 2014″ award.

Gert De Mangeleer and Joachim Boudens have achieved a true first in the world of gastronomy. With an extremely young 25-strong team – with an average age of 22 – they have achieved 3 Michelin stars in just 5 years (1* in the 2007 guide, 2** in the 2010 guide, 3*** in the 2012 guide). This makes them the youngest 3-star team in the world. In 2012, they scored 18.5/50 in the GaultMillau guide. In 2013 Gert De Mangeleer has been elected best chef in Europe at the Madrid Fusion fair, chosen by the European gastronomic press.

Gert’s cuisine is closely tied to Flanders and the sublime local ingredients we have to offer. For the last five years, he has even been growing his own local vegetables, herbs and flowers at the farm in Zedelgem. Under the slogan ‘Simplicity is not simple’, he constantly seeks pure ingredients of the highest quality, using every available technique, but avoiding the flashiest trends. His unique culinary style is now receiving recognition in all five continents.

Joachim Boudens has already been named best sommelier in the country twice over (once by professionals and once by consumers). He also favours the use of our fantastic Belgian beers in gastronomy. His knowledge of the harmony between wines/beers and Gert’s unique dishes is unparalleled. Joachim is also known as ‘the perfect gentleman’. As maître d’ of the restaurant, he has surrounded himself with a group of highly specialised individuals, each making their own contribution to achieving absolute perfection in the area of hospitality.

This ambitious duo won’t stop at winning their 3rd Michelin star. They are aiming higher, reaching a global audience through social media and the blogosphere. They have been showcased by well-known websites wbpstars.com, QLIweb.com and opinionatedaboutdining.com and more recently also http://info.andrewharper.com/download-2013-grand-awards-hideaway-report. Since 2012, The New York Times has mentioned restaurant Hertog Jan as a must-visit location for anyone travelling to Europe.

Gert De Mangeleer’s culinary style is modern, with a regional twist. A product-based cuisine with respect for nature. Vegetables, herbs and edible flowers play a prominent role. His natural methods – Gert follows the vegetative cycle of the plants from sowing to harvest – and inventive culinary approach mean that new dishes are constantly being created with the changes of the seasons. These are characterised by the exceptional depth and richness of their authentic flavours. Last but not least, Gert studies the presentation of the dishes down to the finest detail, like an architect.

Joachim Boudens’ selection of drinks is unconventional to say the least. Right from the first contact, he surprises his guests with a little… water. A swig of water specially purified by him using Eastern mineral rocks to emphasise the simplicity in his slogan. Immediately afterwards he either suggests carefully chosen champagne or an alcohol-free cocktail – refreshing or warming depending on the season. He keeps a short wine list. Of the 350 varieties, each bottle is chosen with care as it has to be able to harmonise with Gert’s cuisine as well as being as good as possible for the guests. He makes his selection freely from all parts of the world, provided that they fit in with the Hertog Jan philosophy.

About the business and its activities:

Restaurant Hertog Jan opened in 1992. It was originally a wine bar/restaurant for business people during the week and a child-friendly family brasserie at the weekend. The globally inspired wine list represented the vision behind the concept. In 2003, the business was converted into a fine dining restaurant with the unique attraction of the construction of the kitchen in a glass building adjoining the restaurant, in which the latest appliances were installed. On 1 July 2005, Gert and Joachim took over the business, with a team of 4 staff. In no time at all they climbed to the summit of gastronomy and were showered with awards and praise. In 2010, the duo bought a historic farm in Zedelgem. This historicly classified monumlent has now been converted and restored. The current restaurant is open since July 18th. It can host up to 100 guests.

Respect is a word that has been central to this duo’s business philosophy from day one. There are many stakeholders in this respect. Respect for one another as professional colleagues but also as close friends. They radiate this to their staff, so that the extremely young, now 34-strong team works together like a family. Respect for ingredients and their preparation has become the signature of their menu and wine list. This is emphasised by their buying their own farm and growing as many of their own vegetables, herbs and edible flowers as possible. Respect for the guests, with Gert making allowance for all kinds of allergies and food preferences and Joachim and his service team pampering guests in a disarming way. Respect for historical heritage: “The choice of a listed farmhouse was totally deliberate”, says Joachim. “Gert wanted to work as close as possible to nature. This nod to our historical past underlines our respect for our own roots. When we aim for something, it all has to work”. This approach is followed throughout the construction of their new restaurant. With the greatest respect for the environment, ensuring that they burden it as little as possible, Gert and Joachim have adopted a nature-friendly approach. They draw their water from their own land and recycle as much as possible. Rainwater is collected in two ways and recycled for the washrooms and watering the crops. Organic waste is collected and fermented to produce energy. Doing business responsibly comes first! In 2014, Hertog Jan acclaimed the highest level in the Sustainable Restaurant Association.