On a Khmer Market

Food wasn’t the first thing on my mind when we booked a family holiday to Siem Reap to see Angkor Wat and the ancient Khmer temples of Cambodia.

However, the curiosity of the Chef in me, will always be on the search for the next market, the local food experience and cuisine.

Siem Reap, despite all its tourism, is still an “old” life town. Relaxed, sleepy and in many ways, reminded me of what a gold miner town must have been like in its hey day. It has the feel that, if tourism would suddenly stop coming here, all and everything would go back to the jungle outpost it once must have been. 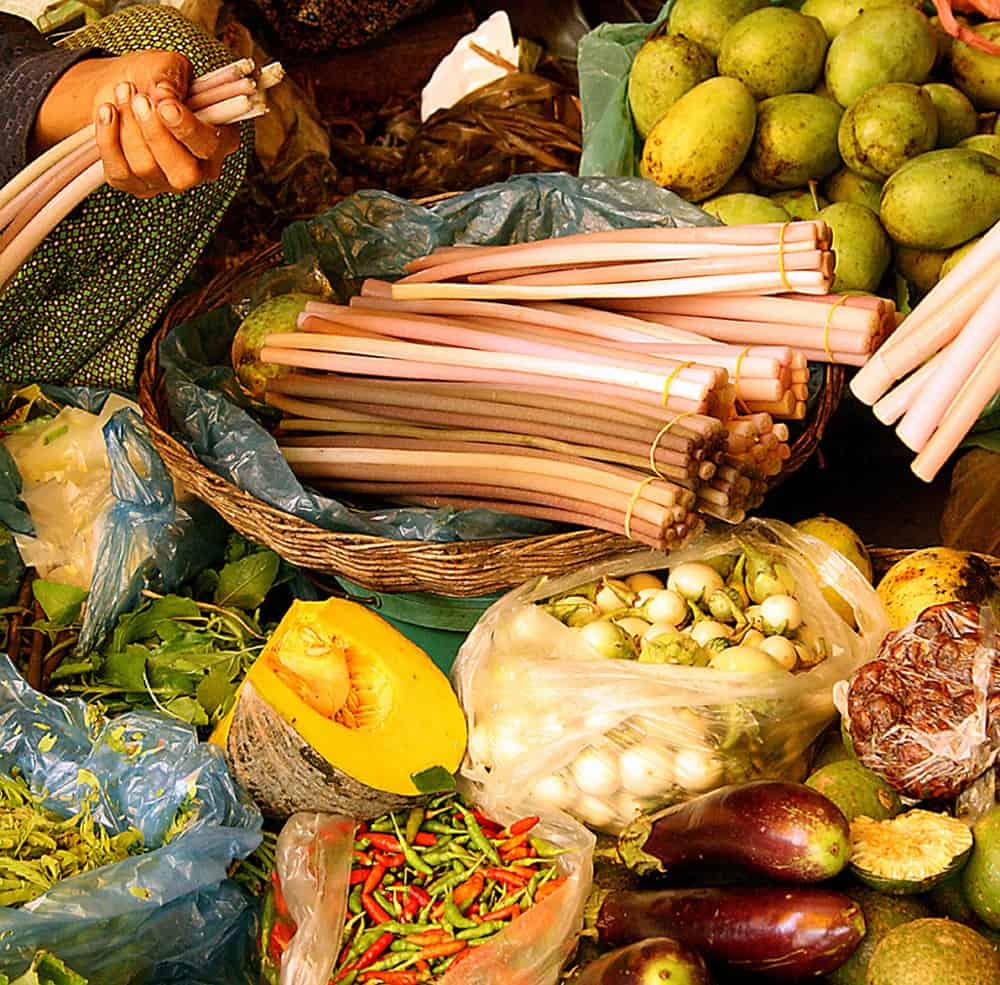 The streets are lined with vendors, offering everything from fried doughnuts and freshly squeezed sugar cane juice to grilled bananas, salted clams and fried grasshoppers

As I make my way to the fresh food market, it seems that the town has not awakened yet, it is already 9:30 am! Children on bikes are on the way to school and shop owners are cleaning sidewalks and surroundings in anticipation of the afternoon business, while the tourists come back from their visits to the temples.

The streets are lined with vendors, offering everything from fried doughnuts and freshly squeezed sugar cane juice to grilled bananas, salted clams and fried grasshoppers, all on mobile carts or carried through the streets looking for buyers.

One of the vendors sells one of my favorite Asian salads – ‘Bok Lhong’ is what it is called here but similar salads exist in Laotian and Thai cuisines – shredded green papaya, crushed in a mortar with some chilies and dried shrimp or fish, and seasoned with lime juice, palm sugar and fish sauce or “prahok”; then sprinkled with peanuts.

The market is in stark contrast to the surrounding streets. Here business is in full swing. The sellers are sitting on bamboo mats on the floor in the middle, while the customers pass by, choosing the quality and haggling with the prices. Vendors actively praise their products to the buyers. It must have been done this way since ancient times.

Local produce offered is limited, but everything that is there seems to have been freshly harvested this morning and brought directly to the market.

Chicken, pork and fish are being butchered, gutted and scaled and/or chopped right on the spot. Most of the fish is still alive and being prepared while the customer waits.

The nearby Tonle Sap lake and supporting rivers are the main sources of fish for the people in this region of Cambodia, who get up to 80% of their protein from eating fish. Catfish, whitebait, Pangasius (Basa), eel, crabs and some blue river prawns are local delicacies, while squid and some other seafood finds their way from the coastal regions to the inland market of Siem Reap. Vegetable like water spinach, bamboo shoots, banana hearts, tender lotus stems, long beans and bitter gourds are all cleaned or neatly bundled for sale and proudly displayed.

The market also offers every type of salted and dried fish, fish parts and prawns and fresh exotic products such as snakes and frogs.

To the left of the walkway along with the produce vendors are a myriad of cooked food stalls offering anything from a quick snack of fried noodles or rice porridge to take home meals.

Khmer cuisine is closely related to its neighboring more famous cuisines of Thailand and Vietnam. Centuries of immigrants from China, have brought noodle dishes and other influences which today are an integral part of Khmer Cuisine.

Khmer cuisine is not as spicy as Thai cuisine and to this day has many colonial French influences similar to the ones in Vietnamese cuisine.

This French influence is most prominent during breakfast where the baguette and coffee with (condensed milk) is a staple in this otherwise rice eating culture.

Another reminder of the French occupancy are the preserved lemons. There are several Khmer dishes that ask for this ingredient (usually only used in North African  – Maghreb – cuisine). I can only assume that the existence of this specific ingredient in Khmer cuisine is due to the French also having colonies in North Africa. As it was a useful ingredient to fight Vitamin C deficiencies on ships, it then found its way to Cambodia.

Khmer cuisine is fresh and light. Dishes are flavored with lemongrass, kaffir lime, kaffir leaves, galangal, garlic, and ginger. For heat, local black pepper from Kampot is preferred to chilies. For sour and/or tart notes, tamarind is often used and soy and oyster sauce provide the salty notes along with“prahok”; the Cambodian fermented, salted fish paste.

Almost all countries in Asia used fermented fish pastes but for authentic taste it is essential to use the country’s specific variety.

Kreong, a paste made out of the most fragrant ingredients in Khmer cooking, is the building block of Khmer cuisine. Lemon grass, Kaffir lime skin, kaffir leaves, fresh turmeric, galangal, shallots and garlic, are all pounded or mashed to a paste in a mortar. There are other ingredients that can be added such as fragrant basil and chilies, but the basic paste in general stays the same. Green, yellow and red “Kreong” are used for various different dishes, yellow for curries, red with more heat (chili) for beef dishes and grilling. Kreong is fried in little oil, as the fragrant “starter” before adding the main ingredients or as a marinade for meat and poultry before grilling.

Curries (Kari) are said to be influences from India, but are served mild, very yellow (lots of turmeric in the mixture) and heavily “creamed’ with coconut milk.

Perhaps most typically, Amok, an omnipresent dish when dining in Cambodia, is the quintessential Khmer cuisine dish. A heavily coconut flavored mild curry mostly made with white fish soured with tamarind and a squeeze of Kaffir lime. Served always with the customary cup of hot steamed fragrant rice.

It is unlikely that Khmer cuisine will become as sought after in the world as Vietnamese and Thai cuisines already are, but it has certainly has found its way into my list of favorite cuisines.

Siem Reap has all but one franchised fast food chain that is trying to get a foothold here. It is odd, or rather unusual, but at the same time quite enjoyable to walk through the streets without the globally ubiquitous “golden arches” or Starbuck’s coffee houses.

Oh, there are plenty of Café’s or ‘Boulangeries’ around; small little bake shops selling baguettes and coffee with a few simple tables in front of them. The French seemed to have left but the baguette and coffee have stayed on.

As I wander through this busy, bustling morning market, as people go about their everyday life, buying products and fresh produce to prepare the family meal, I realize that even though there isn’t an endless supply of different ingredients to choose from, it is the freshness of the ingredients, the care and refreshingly mild use of spices and the simplicity of the traditional dishes, that make Khmer cuisine truly special. Perhaps we should all learn a little from these people here.

The Cambodian people have gone through war almost their entire existence and they have learned to appreciate the simple things in life and this shows in their cuisine, simplicity, freshness and wholesomeness – Khmer cuisine.