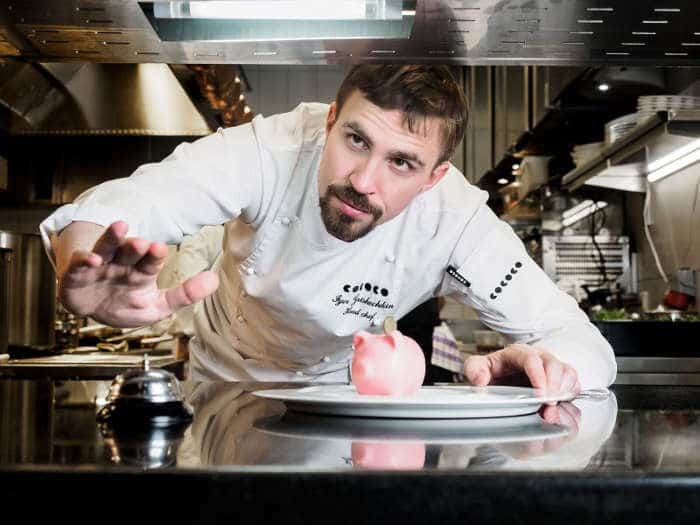 Igor Grishechkin, Chef at the famous Cococo restaurant in Saint Petersburg, is one of Russia’s rising culinary stars. We sat down with Igor and talked about Russian cuisine, his favorite Russian ingredients, and his advice for those looking for a career as a chef.

What inspired you to become a Chef?

My family owned a house with a vegetable garden and my father was a hunter and a fisher. Since childhood I knew where the meat comes from, how to scale fish, milk a cow, hence the brightest memories — how cattle was butchered, how it was disemboweled, then salted, smoked, or fried, and there was no cruelty in those actions.

Today people in the city do not see how their food is made, how meat is made. I’ve seen all the stages from birth to a state of smoked ham, and this is not something you forget. Also I always loved baking, creating new dishes, was interested in cooking since childhood. At some point where I had to establish what to do next, I chose kitchen.

Russian cuisine is valued for simple, but distinctive products.

What ingredients and dishes stand out from the Russian cuisine?

Pearl barley and buckwheat, dry aspen mushrooms, capelin caviar, game. Incredible rye bread with or without salt. Baked milk — it’s fantastic! And semolina, from childhood, with baked and condensed milk and berries it transforms into traditional Russian dessert — Guriev porridge. That is why Russian cuisine is valued — for simple, but distinctive products.

Russia is a huge country – how does the cuisine differ from one region to the other? Do you have any favourite regional ingredients or dishes?

Certainly! For example, take North and South — they have absolutely different food baskets. And Russia has a lot of wonderful products! Just last year I’ve discovered numerous must-have products for myself: ark-shell shellfish from the Sea of Japan, black kaluga caviar, wild celery, red-cup fungus (mushrooms which are first to appear in spring forest).

At Cococo we have our own herbalist and mushroom hunter as they help us find more of that. Speaking of favorite regional products, I would love to mention smelt — small fish with a very distinctive cucumber smell, spring season here starts with it.

Russian cuisine is at the beginning of the international journey right now.

Why do you think Russian cuisine is not very popular internationally?

We, Russians, are used to a lot of different flavors, they are well-known since childhood, formed in subconscious, maybe that is the reason of popularity of some of our dishes – filled with childhood memories and nostalgia. And for foreigners it is like flavors from another planet, that’s why it takes longer to gain international trust and popularity.

What international dishes do you think would not be very popular in St. Petersburg?

I think that with a right amount of persistence it is possible to find a consumer for any product, especially speaking of food. St. Petersburg is a major international city, there is a lot of interest to all the cuisines.

Tell us about the new Russian cuisine?

Modern Russian cuisine follows a simple principle – to use that we are rich with, everything that has been gathered, fished and produced in local region in actual season. According to this principle we cook true Russian cuisine.

Seasonality is a cornerstone of many national cuisines, it is not a new modern tendency created by Chefs, it is a base for any right true cuisine. Product itself is the foundation of any national cuisine, and Russia is not an exception. Seasonal products are the best there is!

Every dish in Cococo has a story, an image, associations, a meaning, and a gastronomical script.

Tell us about your signature dishes – what makes them special?

The limitations in products choice that appear because of seasonality and locality principles I consider the main motivation in my work and the main source of inspiration. I am not afraid of interpretations and borrowings from the rich worldwide culinary heritage, modern technologies and our foreign colleagues experience, but never forget about culinary traditions of our ancestors.

They are the foundation of my kitchen. Every dish in Cococo has a story, an image, associations, a meaning, and a gastronomical script. Always about memories of food from childhood and youth. For example, there is a memory of a canned food «Tourist breakfast», warmed on a fire in a camping trip. Based on it, we cook smoked beef tartar with pearl barley, and serve in a can.

Faberge egg with black caviar and edible gold hiding inside, creme brulee disguised as an antique cameo, simple buckwheat turns into «Kasha iz topora» (Porridge from an ax) from a kid fairy-tale, and acorns — into Russian tiramisu.

I never try to combine products and flavors that cannot be combined. All flavors are simple, understandable, traditional. Rye bread with sprats, pea soup with smoked meat, wild boar dumplings with dry mushroom broth. An understandable and familiar image is deconstructed and then combined anew.

Here at CoCoCo we consider true gastronomy to start with a reign of produce. Products are the foundation, the cornerstone for everything else. With seasonal and local limitations it becomes even more important. Right now I am preparing a new winter menu with new stable positions, which can last in the menu for a long period, because in this time product choice is quite poor: no fresh greens, no fruits or vegetables, only root vegetables, grains, fish, meat and poultry. And all of them have to be of best quality.

What’s the most challenging thing in running the kitchen of a highly trend restaurant?

To maintain the golden balance of discipline and the necessary rest, to keep the team motivated and in shape, but without overdoing it.

«Soldier who does not want to be a general, is a bad soldier» – that is the principle I followed with every workplace choice.

What advice would you give someone who wants to become a Chef?

Work in the kitchen, through hard labour, stress, burns and cuts, gives the necessary knowledge and experience, incomparable to all the difficulties. It works only if you have a goal, though.

We have a saying in Russia, it goes «Soldier who does not want to be a general, is a bad soldier» – that is the principle I followed with every workplace choice, always selecting a certain kitchen, a certain Chef to learn from, and it is what I can advice to do to all of those who wants to be a cook.

Do you recommend a formal training (i.e. culinary school) for someone who wants to become a Chef?

It certainly gives you a good basis, but I also know a lot of self made cooks, who have reached heights just because of their own willing to advance, to develop, to learn . Practice and desire often mean more than a classic training.