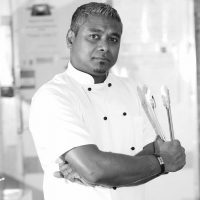 All posts by Jiju Rajappen

Chef Jiju Rajappen was born in India and has moved to Australia for his culinary education, where he currently resides.

He has worked as executive chef or chef de partie at some of the best hotel chains in the world such as the Hyatt Group, Intercontinental or Crowne Plaza.

He has previously cooked for U.S. Presidents Barrack Obama and George Bush, Her Majesty Queen Elizabeth II of England, and musicians such as Elton John and Michael Jackson.

In an interview for the Samoa Observer Chef Jiju said: “I was born into cooking. I used to help my mother a lot in cooking. My brother is also a chef, so that drives me to become who I am. And I also love eating food.”

Share
How to prepare the snapper: Combine whiskey, sugar and salt to marinate the snapper. Nicely rub the snapper with the curing mix and keep in the fridge for 2 hours....

Like 2
Read More
Comment
Share
This is a fantastic risotto with mussels recipe provided by Chef Jiju Rajappen of Sheraton Samoa. How to Make Tomato Salsa: Bring water to boil in a pot. Meanwhile score...

Like 5
Read More
Comment
Share
How to Cook Tuna Carpaccio: Trim the loin and cut into 15 cm long pieces. Tightly wrap with cling film and freeze for 12 hours until solid frozen. Now take...

Like 3
Read More
Comment
Share
How to Make the Chicken Liver Parfait: Mix all ingredients in an upright blender keeping only the egg white on the side. Pass everything through a fine strainer and combine...

Like 7
Read More
Comment
Share
This is a fantastic borscht recipe with beetroot dumplings provided by Chef Jiju Rajappen of Sheraton Samoa. It is served warm together with bacon Parmesan crumble. How to Prepare Borscht:...