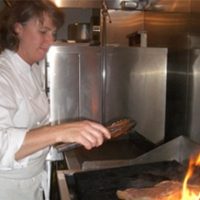 All posts by Susan Holt

CulinAerie co-founder Susan Holt received a BA in English literature magna cum laude from The University of Tennessee in 1984, where she was a John C. Hodges scholar. She received an MA in English literature from Georgetown University. She graduated with honors from L’Academie de Cuisine’s two-year Culinary Career Training Program in 1989 and worked in various Washington, D.C. restaurants for six years, notably Georgetown’s famous 1789, at which she held the position of executive sous-chef for two years. She also worked at The Dining Room at the Ritz-Carlton for two-star Michelin chef Gerard Pangaud, as well as authoring a newsletter, Tastes and Flavors, for his eponymous restaurant.

Share
Cooking Time: 35 mins
This delicious risotto with peas and mushrooms (morels) recipe was provided by Chef Susan Colt. Susan is the co-fonder of CulinAerie, a prestigious cooking school based in Washington D.C.  Chef...