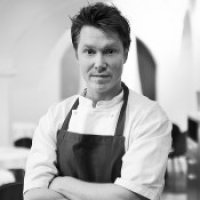 Søren Selin is a master of the senses. His tools are sourced from all that is offered by the local flora and fauna which he uses to create an incredibly stimulating experience of taste, colour, smell and texture.

His gastronomic philosophy is positioned from a modern style, using purely fresh Nordic produce. He states: “My passion has always been to cook at the very highest level and at all times further develop my kitchen: A local cuisine that’s rooted in Danish ingredients and seasons, and a natural cuisine where the raw materials are the stars.”

Chef Selin has a culinary past at Le Relais Louis XIII (2 Star Michelin) and Jules Verne (1 Star Michelin), both situated in Paris, and at Alberto K in Copenhagen, – where he spent four years as the Executive Head Chef of the restaurant, including managing all food related matters of the iconic Hotel Royal.

Besides being rewarded with only top reviews for his gastronomy, he has been nominated in various categories for “The Danish Dish of Year” five times, taking prizes home to highly accoladed Restaurant AOC  in 2013 and 2014.

Søren Selin was appointed Head Chef of AOC in March 2013 and has since received only top marks from all Danish and international food critics, taking Nordic Cuisine from punk to aristocracy.

In 2015, and again in 2016, AOC was awarded a second Michelin star, making the restaurant among the only two in Copenhagen with this desirable accolade, the other being Noma now Geranium has received the third star.

Share
Onion Sifon Blend everything except oil. Add oil little by little. Heat in waterbacth at 65 degrees. Onion Bake the onion on salt in 200 degrees oven. For 1 hour...