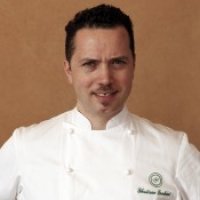 Sebastiano Lombardi was born in the South of Italy in 1976. Since he was a child he was fascinated by the magic world of the cuisine and he started his studies at Catering College in Melfi, where he graduated in 1995. He began his career as a commis de cuisine, gaining his knowledge of the culinary world with qualifying experiences in some of the best Italian restaurants, working with great chefs such as Carlo Persia, Giorgio Pini, Antonio Guida and Nino di Costanzo. In 2010 Sebastiano Lombardi joined, as the executive chef, Cielo restaurant at the Relais La Sommità in Ostuni, and in 2011 he was awarded with its first Michelin star. Sebastiano seduced the critics thanks to an elegant balance between tradition and innovation, and a very attentive choice and use of the of raw materials. In 2015, Sebastiano will take the reins of Il Pellicano Restaurant.

Share
Seafood Clean all the fishes and shellfishes and keep them in container with seawater and just a bit of ice. Skin  the cuttlefish  and remove the small bone inside; cut...