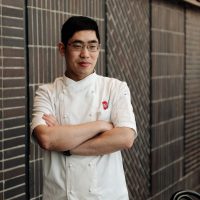 All posts by Sam Wu

Originally from Wuxi, a city in the southern Jiangsu province of China famous for its history and culture, Sam is based at New Shanghai Chadstone in charge of the creation and making of all New Shanghai dim sum and dumpling creations. Sam studied Cuisine and Nutrition Technology at Wuxi Institute of Commerce, and always had a strong interest in Chinese Dim Sum due to the skill and technique required. A Pastry Chef in New Oriental Hotel in China before coming to Australia in 2009 to work as a Chef at the Orchid Garden Chinese Restaurant in Melbourne’s Chinatown before joining the New Shanghai team in early 2014. Sam’s skills and techniques saw him invited to Sydney TAFE and Le Cordon Bleu as a Guest Tutor to teach students the art of dumpling and dim sum making. Sam has also appeared on TV show and Radio shows sharing his dumpling making experience and tips on how to become a Dim Sum Chef.

Share
Cooking Time: 60 min
Chinese dumplings or jiaozi have a history of more than 1800 years (!!!) and have become a cultural heritage of China. These pork & cabbage dumplings recipe comes from Chef...