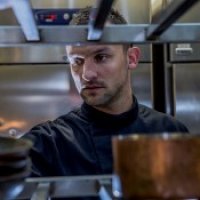 All posts by Radovan Blagić

Radovan Blagić, executive chef at the Monte Mulini Hotel, began his cooking career at the Rovinj-based Valalta campsite, where he gained invaluable experience at a large fish restaurant. Afterwards, he transferred to the Angelo d’Oro Hotel, where he extended his knowledge of presentation and organization. In 2008 he started working at the Adriatic Hotel under his mentor Priska Thuring, who taught him the most, he claims. He used to be her right arm and her shift supervisor, and soon was appointed chef. In 2014 he was appointed deputy head chef at the Monte Mulini, and now he is the executive chef.

Even though, personally, he prefers more traditional dishes, he prefers cooking international dishes for his guests, at the same time creating symphonies of flavors and top-quality presentations. Today you can try his cuisine at the Wine Vault restaurant at Monte Mulini Hotel in Rovinj.

Share
Roll a strip of fresh tuna in the sesame/pepper mix and then sear in a hot smoking pan until seared evenly on all sides. Remove from pan and cut at...