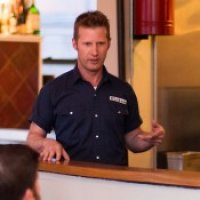 All posts by Phillip Frankand Lee

Chef Phillip Frankland Lee began his journey into the culinary world as a dishwasher at the age of 18. From there he moved up the ranks through kitchens of Quinn Hatfield, Stephan Richter, as well as spent time at Alinea and L2O. Through the stages of his career he developed a style of his own and opened Scratch|Bar in Beverly Hills with his wife and pastry chef, Margarita Lee, in 2013. He then went on to open The Gadarene Swine a year later. In December 2015, Chef Phillip moved Scratch|Bar & Kitchen from Beverly Hills to Encino. Scratch|Bar & Kitchen caters to those who enjoy the purity and experience of food, and the same goes for the  ambience. The Gadarene Swine was created with a disposition Chef Phillip had to face when doctors discovered a tumor in his ear, Chef Margarita put him on a diet of vegetables herbs and juices. From there Chef Phillip was inspired to create a restaurant that serves just vegetables. Some may say it’s vegan, but Chef Phillip’s idea wasn’t stemmed from veganism, but rather just pure organic form of vegetables without any added ingredients.

Both restaurants have received outstanding accolades throughout the last two years, such as “Best Young Chef in America by San Pellegrino”, “Zagat 30 under 30”, “#97 Best Restaurant 2015 in the U.S., in Opinionated About Dining” which inspires and grows the future of Chef Phillips venture. Chef Phillip also holds the record with The Food Network for “Most Consecutive Wins” beating out the competition on Chopped, Guy’s Grocery Games, and Cutthroat Kitchen. Chef Phillip can be currently seen on Bravo’s “Top Chef” Season 13 as a contestant.

Share
Corn Pudding Grate the corn on a cheese grater all the way until the cob, make sure we have all the moisture. Put it in a small pot whit some...