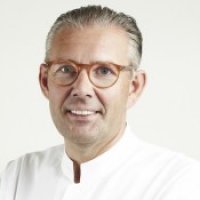 Peter Goossens’ journey as one of the top chefs that we know today began in his home country, Belgium, at the Hotelschool Ter Duinen. He then spent four years in France gathering first-hand experience in the fine art of cooking. Today, the hallmark of his recipes is the use of seasonal nature’s produce that tantalize and refresh the taste buds. He runs the very successful 3 Michelin star restaurant, Hof van Cleve, where he offers dishes that are a unique blend of the modern and the traditional. His cooking scores high on taste, presentation and variety. With gourmet flair he reimagines classic Belgian dishes that are popular with both traditionalists and modernists. Peter is definitely a master of his craft and the unrivalled range of dishes at the Hof van Cleve bear testimony to that fact.

His dedication to all that is local, fresh and seasonal, and his ability to interplay with flavours has seen his stature grow over the years. He is one of the most sought after chefs and is often seen on television shows- as a judge or in some other capacity. He has, very deservedly, received many accolades throughout his long and illustrious career, so many that it would not be possible to list all of them all here, so we’re sharing the top ones.

Golden delta – best chef in Belgium 1993
Culinary award – the most delicious table in the country 1994
The greats of tomorrow – Gault Millau 1996
Knight in the order of the black truffle 1998
Master chef 2000
Five star diamond award – the American academy 2003
Chef of the year– Gault Millau Benelux 2004
Golden whisk – chef of the year – Knack restaurant guide 2005
Meals of the year – Robert Parker 2005
Restaurant personality of the year – Leaders’club 2008
Man of the year – Knack magazine 2010
Knight of the Leopold order 2011
Awarded as “Best Restaurant of the World” by wbpstars.com 2011
Trophy Gault Millau – 10 yrs 19.5/20 – Best Chef of Belgium 2012
Elite Traveler’s Top 100 Restaurants in the World 2012-up to now
Opinionated About Dining Top 100 European Restaurants 2013-up to now
Awarded as ‘Third Best Restaurant in the World’ by FOUR Magazine 2014

Best restaurant in Belgium 2005-up to now

Shoes Or No Shoes

Share
Squid Use a cleaned squid for the strips. Cook the squid and olive oil sous-vide for half an hour at 50 °C. Let it cool down. Slice the squid in long, thin strips...