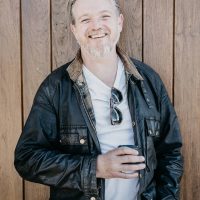 Mike McEnearney, executive chef and founder, opened Kitchen by Mike (KBM) in Sydney’s Rosebery in 2012. The ingenious Kitchen by Mike canteen style eatery champions egalitarian dining and the use of the best local and seasonal produce. From day one, it drew unprecedented crowds and quickly gained cult status among the food and restaurant sector. KBM strips down traditional restaurant dining to find something more honest. Take away the fancy cutlery, the reservations and the waiters and discover a canteen with candid cooking and responsible food. We set the menu daily based on what we find at the markets; the commonality in every menu is seasonality, simplicity and freshness, above all. We believe it’s about how food is found, grown, cooked and eaten. In 2014, Mike pioneered the creation of Australia’s first urban Physic Garden, putting a new spin on the kitchen garden, and underpinning his long-held belief that food is medicine.

After closing his flagship venue in Rosebery in 2015, Kitchen by Mike opened in Sydney International

Airport Airside in 2017 followed by KBM Express Landside in 2018. Kitchen by Mike Airside was awarded the overall winner of the best casual airport dining experience in the world at the 2018 FAB Awards.

In May 2019 Kitchen by Mike opened in Sydney CBD much to the delight of his dedicated followers who can now dine for breakfast, lunch and dinner.

Breakfast and lunch can be taken away or eaten in-house, with fresh cold-pressed juices, Five Senses coffee or wine and beer from an all Australian list of artisan winemakers, distillers and brewers.

The space transforms in the evenings when lights dim, candles are lit, and table service resumes with a more refined experience that maintains the same generous and warm approach.

Since opening Kitchen by Mike CBD has been crowned a Delicious Magazine Top 100 restaurant in 2019, nominated as ‘Best New Restaurant’ in the 2019 TimeOut Food Awards, named by Broadsheet as one of the ‘Best New Sydney Restaurants of 2019’, rated 14.5/20 by Terry Durack for Sydney Morning Herald Good Food Guide and 3.5/5 by Anthony Huckstep for Delicious Magazine.

Mike McEnearney is also creative director of Sydney’s Carriageworks Farmer’s Market since 2015 (which receives over 5,000 visitors every Saturday). Mike has created an authentic farmer’s market in an urban environment. He nurtures over 80 New South Wales artisan producers and champions the importance of buying local and forming a relationship with the food you eat and where it is from.

This enables Mike an intimate knowledge of New South Wales’ most exciting and diverse producers and allows him first pick to work with ingredients from across the region for his restaurant Kitchen by Mike. He also curates the infamous Carriageworks Night Market collaborating with Australia’s finest chefs to co-curate and invites over 50 bars and restaurants to each Night Market event. Since 2016 the Night Market has successfully held eleven sold out events of 7,500 visitors.

Mike also has a range of KBM condiments and jams sold in his outlets and a number of publishing projects including his first book released in 2015 ‘Kitchen by Mike’ which won ‘Best Chef Cookbook’ at the international Gourmand Awards. His second book ‘Real Food by Mike’ was released in August 2017 focusing on the medicinal benefits of seasonal ingredients. Both books champion Mike’s food philosophy and ethos to share with his audience.

Share
This is the perfect vegetable dish to serve in the middle of the table, hot and sizzling straight from the oven. I really like the strong red cabbage and wine...