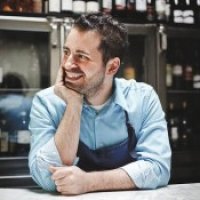 All posts by Matthew Accarrino

Matthew Accarrino is the nationally recognized chef of SPQR in San Francisco, CA. Born in the Midwest and raised on the east coast, he moved west to California in 2007. His unique culinary style draws inspiration from his Italian heritage, personal experiences, and classical training with some of America’s best chefs, coupled with his embrace of the bounty of opportunities that California ingredients present. With a strong belief in direct sourcing, Accarrino endeavors to play a role in the growing and development of many of his ingredients. The result is an intensely personal cuisine that is both technically polished and soulful; and which has garnered praise from publications such as Food & Wine, Bon Appétit, Saveur, San Francisco Chronicle, 7X7 and San Francisco magazine. Under his direction, the restaurant was recognized with a Michelin star in the 2013, 2014, 2015 and 2016 guides. Accarrino has been nominated four times by the James Beard Foundation for “Best Chef: West.” FOOD & WINE named him a “Best New Chef” in 2014 and FOOD & WINE readers named him a “People’s Best Chef California” in 2013. Accarrino co-authored and released his first book, published by Ten Speed Press, SPQR: Modern Italian Food and Wine, in October 2012.

FOR MORE INFORMATION OR TO SET UP AN INTERVIEW, PLEASE CALL WAGSTAFF WORLDWIDE AT 415.274.2510

Share
To make the farinata:Lightly coat two 9 by 13-inch baking pans or rimmed baking sheets with nonstick spray. In a blender, purée the chickpea flour and water. Pour the batter...