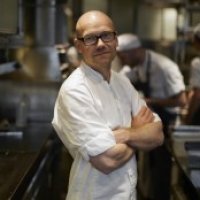 All posts by Magnus Ek

Magnus Ek is the executive chef and owner of Sweden’s 2 Michelin starred "Oaxen Krog" and also the Bib Gourmand awarded "The Slip". He started his career as a chef in 1984 after graduating from restaurant school in Sweden. Since then he has worked in various top restaurants in Sweden and also at Restaurant Saison in Denmark. He has authored and contributed to a number of cookbooks, been a member of the Swedish national culinary team and lectured at the University of Umeå, Sweden.
Oaxen Krog has garnered multiple awards during it’s previous lifetime on an island in the archipelago between 1994 and 2011 –  including a listing on the 50 Best Restaurants of the World 5 times in a row and 5 times named Sweden’s Best Restaurant by the White Guide – and continues to do so today at its new home in Stockholm, where it reopened in 2013.

Share
Mackerel Cut the mackerel into small pieces. Salt the mackerel and place on an oiled tray. Bake in oven at 220 ° C for about three minutes, lift out and...