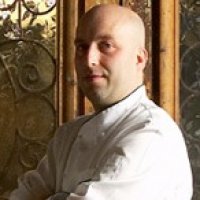 Lorenzo Loseto, one of Canada’s premier chefs, has been the Executive Chef of George since its inception in 2004. His modern approach to cooking, combined with his classic training, has allowed him to create a unique and entertaining food experience.

Born in Bari, Italy, Loseto’s decision to become a Chef is connected to his Italian home cooking roots. A culinary apprenticeship was his goal because he was determined to use his Italian heritage as a foundation that allows him today to be as diversified in his culinary career.

Chef Loseto places an emphasis on seasonal, natural and sustainable food. He creates a daily blind tasting menu where guests are encouraged to try many courses in order to fully explore the bold flavours and textures of his cooking.

“I like to call my cuisine Toronto Cuisine. The food is entrenched with tradition but influenced by the Multiculturalism of Toronto. The menus are inspired by the seasons and have a strong emphasis on fruits and vegetables. At George, Omnivores and Vegetarians are able to dine with equal diversity” says Loseto.

Chef Loseto credits his family for a large part of his success. Prior to joining George, he honed his skills in some of Canada’s finest kitchens. He is also a culinary professor and a mentor to many apprentices.

Share
Here’s what to look for when buying fresh fish: Firstly, buy fish whole and have it filleted by your fish monger. Once bought, it should be consumed within a day...