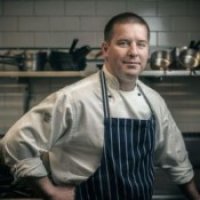 Lee Kwiez is an accomplished Australian chef. He’s a food puritan who has explored ingredients and techniques around the world, including Zurich, Switzerland, to find himself in a pristine place that matches his food philosophy – the Blue Mountains.

He started out at Maxwell’s Table, a restaurant up the road from home, to Hayman Island, then Toronto, Canada, and then Milson’s Restaurant where he was for 10 years. An outstanding achievement was winning a Chef’s hat over six consecutive years.

A significant shift for something different was to go from fine dining restaurants to up‐market pubs. Another outstanding achievement was taking Woolwich Pier from a 13 out of 20 to an 18 out of 20 which placed it in the Top 20 pubs in the state – earning three schooners.

As Executive Chef at Darleys it is an outstanding achievement that Lee has been able to retain a Chef’s hat over three years.

Career awards for Lee include:

Supporting Slow Food Blue Mountains, Lee has been a Guest Chef for two years at the Leura Harvest Festival. Darleys supports initiatives such as Cittaslow.

“I mean, if food looks pretty but you can’t eat it, for me, I’m not interested. It’s all about the taste. It’s got to look good too obviously but it’s got to be yum – the yum factor. I love it.” Lee Kwiez