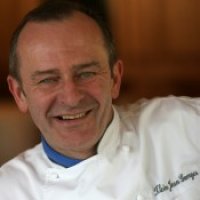 Chef Jean Geoges Klein is a graduate of the prestigious hotel school of Strasbourg. He is a holder of the B.T.H. promo 69. He perfected his cooking through time in Paris, Evian, Douarnenez, and internships at the Nôtre and Alain Senderens in Paris.

At the age of 22, fate entrusted him with the responsibility of Arnsbourg which has been his destiny since then.

Nestled in the magnificent setting of the Northern Vosges near the village of Baerenthal , Arnsbourg owes its very existence to the Vosges forest.

Forty years ago the vast building was a simple bistro, a stopping point for loggers.

Over time chef Klein’s grandmother and his mother and then himself, refined the dishes on offer and won a Michelin star in 1988.

In association with his sister Cathy, chef Klein has continued to move with the times to continue to offer the best to their customers.

Their perseverance, their hard work every day, their natural inclination to a tasteful, refined and discreet style is reflected on the plate and in the atmosphere of the room.

They were awarded a second Michelin Star in March 1998. Ten years to the day after the first.

This was followed by a third Michelin Star in February 2002.

Share
Clementine Marmalade Wash fruits. Cut the fruit into quarters. Cook with sugar and pulp 30 minutes Drain and mix. Set aside. Clementine Biscuit Mix all ingredients except sugar and egg...

Like 1
Read More
Comment
Share
Uncategorized
Currently Uploading! Recipe incomplete at present. Venison Remove venison, keep fillets for later. Cut the venison, colour, add the bouquet garni and add liquid to achieve the base for the...