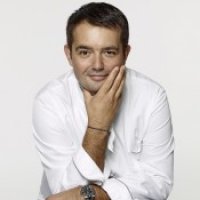 All posts by JeanFrançois Piège

“Suddenly, it has dawned on people that Piège is the most important creative chef of recent years.” Omnivore Foodbook, 2014.

Elected chef of the year by six thousand of his peers in 2011, and Creative Chef of the Year at the 2014 Omnivore food festival, Jean-François Piège is a gifted culinary artist.

After several years at the helm of Paris’s 5-star hotel restaurants, he opened the luxurious fifteen-room Hôtel Thoumieux in the seventh arrondissement, complete with a bustling traditional Parisian brasserie, a gourmet restaurant that earned two Michelin stars in 2011 and, most recently, a patisserie.

Jean François Piège is also a successful author with 6 books of French Cuisine.
For the past six years, he’s also part of the jury cast on one of France’s most popular culinary competition « Top Chef » . He is one of the most talented and famous chefs of his generation.

A Chef with multiple projects, he opened with his wife, Elodie in December 2014 « Clover » in Saint Germain des près,A restaurant with a personal culinary proposal: the spontaneous cooking.

Early september, Chef JFP ‘s announce that he’s going to move the gastronomic restaurant to an other area : Jean François Piège/ Le Grand restaurant in the 8th. This new restaurant will be in the middle of what we called the « triangle d’or » near La Place de la Concorde and the Elysée Palace. This new project is perhaps the biggest one, where the Chef is 100% independent and where he’s going to do all of his new culinary creations.

Share
Egg Custard Split the vanilla beans lengthwise and scrape out the seeds using the tip of a knife. Bring the milk and cream to a boil in a saucepan, then...