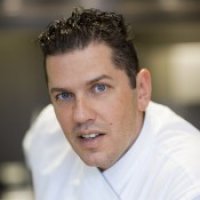 All posts by Jacob Jan Boerma

Restaurant de Leest, owned by Kim Veldman and Jacob Jan Boerma started in the summer of 2002 and since 2013 it has been awarded three Michelin stars. Chef Jacob Jan Boerma does not simply conjure up his kitchen style, he bases it around products from his region and only when at their best.

He has learned the latest and best cooking techniques from all across the world, discovered exciting new ingredients and flavours belonging to various regions, while in Scandinavia he acquired the knowledge of a variety of local ingredients, and he has enhanced his general gourmet expertise during trips to various parts of Europe.

He believes that it is very important to not forget the quality of the product as that is the base of success!

In a skillful and craftsman like way, Boerma translates all of these experiences into cosmopolitan and creative dishes for his sophisticated clientele.

His perfectionist mentality is evident from the way in which he prepares highly flavoursome dishes. It has been acknowledged as culinary art of the very highest standard, which earned the restaurant the number 2 spot on the best 500 restaurants of Holland list, 19.5 points Gault Millau and chef of the year 2010 award.

Share
Goji Berry Sorbet Put the goji berry purée, water, sugar, ProSorbet and the freshly pressed lemon juice into a blender and blend until the sugar has dissolved. Transfer the sorbet...