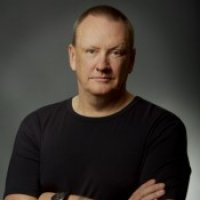 Ian Curley is one of Australia’s most-awarded chefs, with an enduring 25-year tenure in Melbourne that has seen him at the helm of some of the city’s most iconic restaurants, including nine years at The Point Albert Park and more than a decade with the European Group.

Ian’s food is much-loved for its accessible approach and simple philosophy – he cooks the food he loves to eat, across all cuisines. His signature style, however, is European fare of the highest quality, with classic French underpinnings – a legacy from the rigorous training he received early in his career in the kitchens of London.

As a consultant, Ian has enjoyed a successful partnership with The Melbourne Racing Club since 2013, designing menus, training kitchen staff and taking the Executive Chef-in-residence role across the fine dining Black Caviar Restaurant and the Committee Room, servicing a huge number of guests on each of their race days throughout the year. Ian’s skill lies in ensuring each guest receives restaurant-quality food, something he credits to a personalised, honest approach when designing his menus, and meticulous planning.

Ian is also a consultant to Craig’s Royal Hotel in Ballarat where he works in co-operation with the management team to deliver the right brand message to each and every guest through their dining experience.

You may recognise Ian from one of his regular TV appearances – he was host of his own TV show, Channel 7’s Conviction Kitchen, and has had recurring guest spots on MasterChef Australia, Yes Chef and Postcards.

Ian is a dedicated Ambassador to the Pancare Foundation and works closely with his other chosen charities, Solider On and Battle Back Britain. He supports the Australian food and restaurant industry each year at the Taste of Port Douglas and Noosa Food & Wine Festival.

When he is not working, you’ll find Ian spending time with his partner Simone and their three daughters, or perhaps on the golf course.

When it comes to sport he of course is Premier League through and through – an original Chelsea Shed Boy.

Share
This can all be pre prepared apart from the tuna which should be done last minute. Set yourself up a pot on the stove with water and an ice bath....