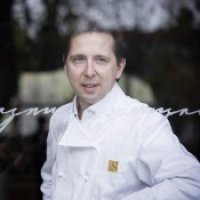 Heinz Reitbauer was born on the 23rd of August 1970 in Vienna. A few months prior, on the first of January, his parents opened the restaurant Steirereck in Vienna. In homage to the Styrian roots of the Reitbauer family the restaurant offered regional delicacies such as Styrian pig’s trotter and root vegetable soup or boiled beef with horseradish. Exposed to these culinary influences from an early age Heinz developed a passion for cooking and the world of gastronomy. Having studied at the hospitality school in Altötting, Bavaria he served a year’s apprenticeship at his parents’ restaurant before completing his training at the restaurant of the Obauer brothers in Werfen.

Upon finishing his apprenticeship Heinz received the opportunity to learn for a year with Alain Chapel in Mionnay near Lyon. Chapel was one of the foremost three Michelin starred chefs in France and belonged to the pioneers of Nouvelle Cuisine.

Heinz continued his international experience one year later at Anton Mosimann’s in London. There followed stints at Joel Robuchon and Restaurant Laurent in Paris.

After Heinz’s return to the parental business in 1992 followed the acquisition of the farm and small country inn in the Reitbauer’s home community of Pogusch, northern Styria.

After three years of intensive planning and building work the Steirereck Inn, Pogusch was opened in May 1996. Originally envisaged as more of a weekend country retreat for the family, the inn and restaurant soon began to develop beyond its remit. With a further extension and redevelopment in 1999 the property achieved the form it has today: the combination of place, people and products creating the perfect atmosphere of escapism. This conviviality is recognized in the fact that the restaurant has maintained two toques from Gault Millau since it opened. Heinz was integral to the running of Pogusch from its inception until he assumed the responsibility of head chef at the newly reopened Steirereck in Vienna. His efforts were honoured with the Trophée Gourmet for best Austrian kitchen in 1999.

The steady rise of Steirereck from a simple city inn to one of the top culinary addresses in the country continues to this day. With the purchase and development of the old municipal dairy in Stadtpark and the subsequent relocation of the restaurant to its new premises in January 2005 a new page in the Steirereck history was written.

With the reopening of Steirereck, Heinz and his wife moved to Vienna, whilst his parents took over the running of the inn at Pogusch. Following the retirement of the long-standing head chef Helmut Österreicher from Steirereck in Vienna at the beginning of 2005, Heinz assumed the sole responsibility of head chef.

Never one to stand still Heinz undertook in 2013 a complete renovation of the Steirereck restaurant and kitchens which was completed in summer 2014.

The cooking style of Heinz Reitbauer reflects his respect and appreciation of raw ingredients and products. He has constructed his own cooking identity on these foundations and through his embracing of the national and regional cooking styles of his native Austria. This style consists first and foremost of the meticulous creation of small moments of surprise for the diner, be this through the discovery of a previously unknown ingredient or the resurrection of one long forgotten. Heinz claims the key to his success is the longstanding, intricate and ever expanding network of farmers, gardeners, foragers, botanists and food enthusiasts he has nurtured over the years who never cease to provide him with inspiration and motivation.

His appreciation for rare and forgotten varieties led him to become active in the protest movement against the EU seed policy which sought to limit the propagation and sale of all but the most standard fruits and vegetables.

Currently Steirereck holds two Michelin stars and four toques from Gault Millau. It has been voted the best restaurant in Austria by A` la carte magazine and the Falstaff Guide. Since 2009 the restaurant is included among the San Pellegrino World’s Fifty Best Restaurants and was awarded the inaugural ‘Slow Food UK’ award in 2012.

Heinz Reitbauer is married and the father of four children.

Share
Venus Clams Cooked with Rice and Tamarind40 portions Heat the oil in a large pot and sweat the vegetables and spices for 2-3 minutes before adding the clams. Combine the...