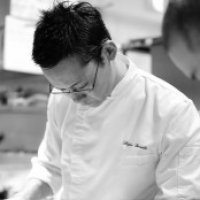 Hajime Yoneda was born in October, 1972 in Hirakata, Osaka.  He spent his childhood and adolescence  in this small, simple mountain town. Engrossed in mathematics all throughout high school,  in university he enrolled in the department of science and engineering,  where he studied electrical engineering. Employed in 1996 by an electronics maker, he engaged in the design of electronics.  He became a chef in 1998, working in restaurants in Japan and France, and in May of 2008, he opened Hajime RESTAURANT GASTRONOMIQUE OSAKA JAPON with the theme  of “A truly wonderful restaurant.”  Then in 2009 – a mere 1 year and 5 months after opening it garnered the ranking of a Michelin 3 star restaurant;  the fastest in history.

In May of 2012, more active  and innovative than ever,  it changed names to HAJIME,  and continues to use each day  as a new chance to express a unique aesthetic  and world view through the mediums of gastronomy, life science, biology, brain science, gastroenterology, business management, architecture, and space science.

Share
Duck To prepare the duck meat, clean the same by wiping all off the inner blood, it is important that the breast have the bone. Make a lattice cut over...