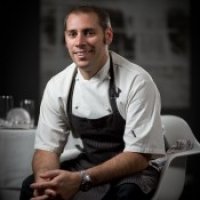 All posts by Hadleigh Troy

Behind an unassuming red brick façade, on a quiet East Perth street, lies Restaurant Amusé. Step inside and be transported into what has been described as a ‘parallel gourmet universe’ and embark on a tantalising journey of decadent degustation dining.

Established in 2007 by Hadleigh and Carolynne Troy, Restaurant Amusé prides itself on refinement without pretension, absent are white tablecloths and reserved service, instead guests are guided through their menu by a skilled team of knowledgeable waiters and chefs.

Innovative, impeccable and respectful use of produce are just some of the rave reviews that surround Hadleigh’s degustation menu which is both creative, humorous and as impressive as the chefs resume. Having worked at The Loose Box and Jackson’s Restaurant after his apprenticeship, he then moved to Melbourne to work at Langton’s Restaurant and at The Brasserie by Philippe Mouchel. This was followed by a move to London where he worked at The Greenhouse in Mayfair and La Noisette in Knightsbridge.

This year the team cemented their spot on the Perth dining scene after being awarded Restaurant of Year and rating as WA’s number one restaurant by Australian Gourmet Traveller for a third year in a row. The awards since opening have been numerous and have included Chef of the Year by The Good Food Guide, a nomination for Maitre d’ of the Year by Australian Gourmet Traveller as well as the couple being recognised as the 2011 National Young Achievers by Restaurant and Catering Australia.

Restaurant Amusé delivers an experience best described as a unique exploration of contemporary dining that will challenge, surprise and delight.

Share
Coffee and Cocoa Melt butter and combine with ingredients above in a bowl and mix through. Spread evenly onto a baking tray and cook for 30 minutes at 160°C Allow...

Like 0
Read More
Comment
Share
Artichoke Ice Cream Cook artichokes in milk and cream, blend until smooth then pass through a fine sieve. Whisk the eggs and sugar together, add artichoke puree. Place in a...