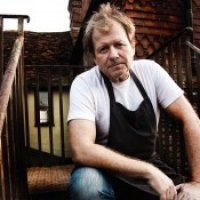 All posts by Graham Garrett

After a previous career as a successful rock musician, Graham’s defection to cooking may be music’s loss but it is the food world’s gain.

He has worked for both Nico Ladenis and Richard Corrigan, as head chef of multiple restaurants. He has cooked for government and royalty, having been fortunate enough to cook at both 10 Downing Street, and also to cater a private dinner for the Her Majesty, the Queen of England.

The Garrett’s bought The West House in 2002, to create their own dining room, and allow Graham to pursue his own vision.

Graham’s food has gained the restaurant multiple awards. They have held a Michelin star since 2004, are featured in Harden’s top restaurants list in the UK, and hold 3 AA Rosettes. Graham has been awarded Best Chef in Kent in the Kent Life Awards. The West House is featured in the 2014 book ‘1001 Restaurants to Experience Before You Die’ (Cassell) and all other major guidebooks.

Graham’s reputation has afforded him many media opportunities, including among them prestigious television show Great British Menu and Ramsay’s Best Restaurant. However he is most likely to be found in his kitchen, creating wonderful food.

Share
Spiced Damson Sauce Put everything into a non reactive pan, bring to the boil and simmer for about 20 minutes or until thick. Transfer to a blender and blend to...