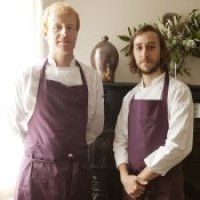 Daniel Puskas began his cooking career when he started his apprenticeship at tetsuya’s in 2002. Since then he has worked with some of Australia and the USA’s best chefs. In 2006 Daniel won the prestigious Josephine Pignolet “best young chef’ award. After traveling around the USA and Spain he came back to Sydney to become the head chef at Oscillate Wildly. At Oscillate Wildly, Daniel received acclaim for his progressive and unusual menu, earning him his first chef’s hat. After leaving Oscillate Wildly, Daniel worked with chef Martin Benn at Sepia Restaurant before leaving to open his own restaurant, sixpenny, with fellow chef and business partner James Parry.

Passionate about his cooking, Daniel takes inspiration from progressive chefs and techniques around the world as well as everyday experiences. sixpenny offers a humble yet refined and playful dining experience. The emphasis is on quality produce that is either grown at the restaurants garden or sourced from local producers.

James Parry’s passion for eating more than cooking led him into the kitchen, a desire to only eat good food perhaps.

Working his way around Sydney, from Icebergs to Billy Kwong and Bird Cow Fish. All restaurants where quality and provenance of produce were celebrated.

From there James joined Daniel Puskas at Oscillate Wildly, where he won the 2009 Josephine Pignolet award for best young chef. The award gave him the opportunity to gain experience overseas which, in James’ case meant working at Blue Hill at Stone Barns in New York, Noma, and a 6 month stint at Mugaritz in Spain. Returning to Australia he passed some time in the kitchen of Manly Pavilion, then Rockpool. Always knowing that he would be teaming up again with Puskas to open Sixpenny.

Share
Steamed Crab 1 live Mud Crab gives you about 250-300g of picked crabmeat. (If you are doing this at home then you can cook the crabs in boiling salted water...