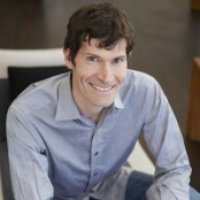 All posts by Daniel Patterson

Daniel Patterson is a chef, restaurateur and food writer. He was born in Massachusetts and moved to California in 1989. Patterson opened his first restaurant, Babette’s, in Sonoma, in 1994 at the age of 25. In 2000, Daniel opened Elisabeth Daniel in San Francisco, which was nominated “Best New Restaurant” by the James Beard Foundation in 2001.

Patterson now has three restaurants: Coi (2006) in San Francisco, and Plum (2010) and Haven (2011) in Oakland. At Coi, which has two Michelin stars, Patterson mixes modern culinary techniques with local ingredients to create dishes that speak of place, memory and emotion. It’s an approach that has earned him a worldwide reputation for pioneering a new kind of Californian cuisine.

He is the winner of many awards, including “Best New Chef” by Food & Wine Magazine in 1997 and “Chef of the Year” by San Francisco Magazine in 2007. Coi was awarded four stars by the San Francisco Chronicle in 2008. He has been nominated for five James Beard awards including “Best Chef: West” in 2013. Coi is currently #58 on the San Pellegrino World’s 50 Best Restaurants list. Daniel has presented at numerous conferences around the world and is a member of the culinary collective Cook It Raw.

Patterson is well known and respected for his food writing and has been published in The New York Times, Food & Wine, Financial Times, San Francisco Magazine and Lucky Peach. His new book, Coi: Stories and Recipes (Phaidon), will be published in October 2013.

Patterson plans to open his fourth restaurant on Market Street in San Francisco in Fall 2013.

Share
From the book, Coi: Stories and Recipes by Daniel Patterson (Phaidon, $49.95, October 2013) Oats Put the oats in a metal bowl. Cook the brown sugar, butter and honey in...