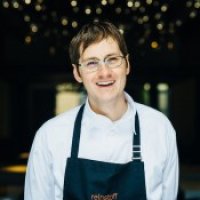 Born in Leipzig, Daniel Achilles is driven by the unconditional desire to always present something new to his guests. This does not necessarily have to be a particular produce, but the way it is prepared or presented. There may certainly be times when the celebrity chef makes his own utensils and prefers using a nicely shaped branch of a walnut tree for the presentation of an amuse-bouche instead of a plate. In his quest for change, Achilles proceeds almost fanatically and keeps refining new creations together with his young team to come up with something entirely personal, unique and, above all, something that had been unheard of before. Yet, he never loses track of the golden thread during this culinary conquest and stays faithful to his style of cooking. Such dedication to the profession and the amount of hard work, concentration and discipline he displays distinguish Daniel Achilles from others. One could almost compare his drive to invent to Moritz Emil Rathenau and Thomas Alva Edison, who were on a life-long search for technological innovations to improve quality of life…

His professional development is both fascinating and impressive: as a son of a cook, he finished secondary school, and then trained to become a cook at the Paulaner Palais Leipzig in 1992. From there, he moved to the first top restaurant in Leipzig – Restaurant Stadtpfeiffer in 1995. Head Chef Rainer Behringer was responsible for him catching the “star cuisine bug”, as he claims today. He completed his alternative civilian service doing landscaping at a Protestant care home. The premises was several hectares in size with a herb and vegetable garden for self-catering and an incredibly large amount of cut flowers, trees and other greenery which taught him to respect nature.

He left Leipzig in 1997 to head south for the first time – to the Landhotel Schlosswirtschaft in Altenstadt, which had been awarded a Michelin Star. By now, he really knew where he wanted to go – all the way to the top. This was followed by stints with Juan Amador at the Fährhaus Munkmarsch on Sylt and with Bernhard Diers – first at the historic Gasthaus Schwanen in Haigerloch and later at the Restaurant Am Marstall in Munich. Bernhard and Susanne Diers were the ones who introduced Daniel Achilles to the idea of running his own business and who continued to influence his late career path. Daniel Achilles also met Sabine Demel at the historic Gasthaus Schwanen. Later, they became a couple. Together, they started working for Christian Bau in 2002, holder of two Michelin Stars at the time. They stayed with him for more than two years at Schloss Berg in Nenning.

At the end of 2004, the couple decided to make a new start – Sabine Demel at the hotel management school Hotelfachschule Heidelberg and Daniel Achilles as chef at the restaurant Maintower, with culinary advisor Juan Amador in Frankfurt. In 2005, Juan Amador finally recruited him as sous-chef at his restaurant Amador in Langen. Here, Daniel Achilles and Sabine Demel decided at the end of 2007, to become self-employed and open a new restaurant in Berlin together. After a planning phase of almost one and a half years, restaurant reinstoff opened in March 2009. Only eight months after the opening, the restaurant won a Michelin Star award. The second star followed in November 2011. And in November 2013, Gault&Millau voted Daniel Achilles “Chef of the Year 2014” and awarded the restaurant 18 points.

Share
*This recipe requires starting a day before for infusion time.Vinegar Strawberries Halve the strawberries and vacuum pack with the Chardonnay vinegar and sugar and refrigerate for at least 12 hours. Strawberry...