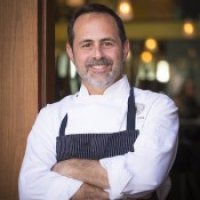 All posts by Craig Stoll

James Beard Award Winner and critically acclaimed chef, Craig Stoll, might be a New York native and a San Franciscan at heart, but it’s his love and respect for soulful Italian cooking that have come to define him. After graduating from the Culinary Institute of America and working through some of San Francisco’s finest restaurants, Craig was awarded a scholarship to attend the ICIF cooking school in Torino, Italy. There it was an externship at Tuscany’s one-Michelin-star restaurant Da Delfina that paved his vision. He returned to San Francisco and in 1998, along with his wife Annie Stoll, opened Delfina, a relatively casual 50-seat restaurant located in the still up-and-coming Mission District, serving rustic Italian food infused with San Francisco’s local and sustainable values.

Delfina quickly became a major dining destination, bringing people from all over to try Craig’s cooking including signature dishes like the Fresh Grilled Calamari, Insalata di Campo and Spaghetti and demanding the restaurant’s expansion to 85-seats. This ultimately garnered him a place as one of Food & Wine’s “Best New Chefs” in 2001 and Best Chef: Pacific from the James Beard Foundation in 2010. In 2005, the Stoll’s opened their first Pizzeria Delfina next door, following up with a second location in Pacific Heights in 2009 and two more down on the Peninsula in Burlingame and Palo Alto in 2014. And with the addition of Locanda, an upscale Roman Osteria & Bar complete with artisanal cocktails, Craig solidified his reputation as one of the country’s most dynamic and influential chefs.

Share
Break open each tomato and remove the seeds. Drop the tomatoes into a bowl.  When all the tomatoes are seeded, break them up with your hands and strain the juice...