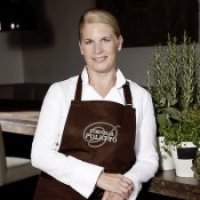 After her traineeships at a hotel management school and in the kitchen of top chef Heinz Winkler, Poletto worked as sous-chef in the star honoured restaurant “Anna & Sebastiano”. There she learned a lot about Italian kitchens at a high level. In 2000, Cornelia opened her own restaurant, “Poletto” with her former husband Remigio Poletto. In only the second year she received a Michelin star for her excellent cuisine. In 2010 the restaurant “Poletto” closed, but Cornelia quickly had a new project.

In June 2011 she opened “Cornelia Poletto” in Hamburg-Eppendorf – just a few meters away from the location of her previous restaurant. Inspired by Italy she then created a delicatessen adjoined to the restaurant; “Gastronomia”. “I wanted to create a place with a familial and uncomplicated atmosphere”, says Poletto. “And excellent food. I wanted to make the best roast chicken in town.” An extraordinary statement for a top chef, extraordinary like her gastronomy-concept. Furthermore Poletto opened “Cucina Cornelia Poletto” in March 2013, her own cooking school .

Poletto is often seen on television, for example; as coach in the cooking show “The Taste”. Her self-created recipes have been published in eight cookbooks. The latest is called “Koch Dich glücklich!” (Make yourself happy by cooking).

In April 2018 Cornelia opened “THE TWINS” by Cornelia Poletto in Shanghai together with her partner ZWILLING.

Share
Wash and drain the lentils, then bring to the boil in the stock with the saffron and olive oil. Season lightly with salt and continue cooking until the lentils are...