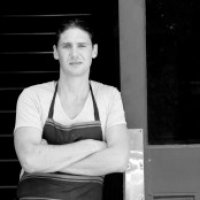 All posts by Colin Fassnidge

Dublin born Colin Fassnidge has been Head Chef of The Four in Hand Dining Room since October of 2005. Since starting at The Four in Hand, Colin’s unique style has seen the Four in Hand hold 1 Chefs Hat for four years and adding the prestigious second hat in 2010.

Learning very early the he had a passion for cooking Colin moved to England where he did his apprenticeship at Le Manoir aux Quat’Saisons under Raymond Blanc in Oxford. Blanc a self taught Chef instilled in his staff a sense of seasonality and also tasting at every stage- a trait Colin uses in his kitchen today.

With a passion for travelling Colin arrived in Australia in 1999 working at some of Sydney’s most acclaimed Restaurants including Liam Tomlin’s celebrated institution that was Banc.

Colin’s Nose to Tail philosophy and his diligence for sourcing the best local ingredients has seen him turn the most undesirable off cuts into beautiful, delicious dishes.

Terry Durack from the Sydney Morning Herald reviewed that Colin’s food is a “more refined version of nose-to-tail cookery than at that patron saint of offal and honesty, St John in London, and is all the better for it”.

Today Colin still is ever ever-evolving his clear style of cooking including slow roasting whole animals, discovering a unison of unique multiple flavours and growing his own vegetables, herbs and flowers.