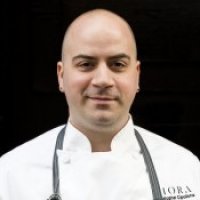 All posts by Christopher Cipollone

Growing up in New York’s bountiful Hudson Valley, Chris always knew he would become a chef, having learned from an early age to appreciate the local and seasonal ingredients that surrounded him.  His parents, both wine industry professionals, encouraged him to attend the Culinary Institute of America.  After graduating at the top of his class, he received a scholarship from Gruppo Ristoratori Italiani, a non-profit organization dedicated to popularizing authentic Italian cuisine, to travel throughout Italy for two months to study the country’s food and wine.

Chris returned to Westchester where he trained under Chef William Saverese in progressive French cooking technique at Le Cremaillere.  He then went on to revamp Auberge Maxime, and later, open Vox.  Looking to join the NYC restaurant scene, Chris left Vox in 2006 to run the kitchen at Dylan Prime for four years, after which he accepted the chef de cuisine position of Chef Scott Conant’s Faustina at The Cooper Square Hotel.  He then partnered with general manager Jeffrey Tascarella to open Tenpenny in 2011.  It was there that he met Simon Kim and the idea of Piora was born.

Chris thrives on the artistry of cooking and believes that food be should fun.  At Piora, he takes inspiration from seasonal ingredients and lets them shine through precise cooking with minimal manipulation.  When he is not in the kitchen, Chris loves to learn about the food of other cultures by exploring New York City, dining with friends, reading and traveling.

Share
Dehydrated Vegetables Lay vegetables on dehydrator trays, and in a dehydrator set to 160°F, dry vegetables for 24 hours. Sunchoke Dirt Heat oven to 300°F. In a sauté pan, heat...