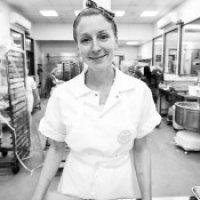 All posts by Christina Tosi

Christina Tosi is the chef, owner and founder of Milk Bar, called “one of the most exciting bakeries in the country” by Bon Appetit Magazine. Christina began her career working for a number of powerhouse fine-dining chefs and from there, Christina founded the dessert program at Momofuku, and went on to build a culinary empire of her own. Described by The New York Times as a “border crossing pastry chef,” Christina opened Milk Bar’s doors in 2008, and has expanded to 13 stores and counting. Most recently, Christina is featured on this new season of the Emmy nominated Netflix docu series, Chef’s Table Pastry.

Share
When I was a baker at a conference center on Star Island, twelve miles off the coast of New Hampshire, I learned how to make this kind of cookie from...