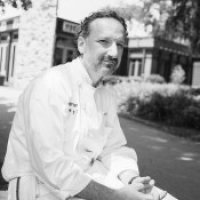 All posts by Bruce Sherman

As Chef and Partner at Lincoln Park’s North Pond, Sherman utilizes influences he picked up in Paris, Southeast Asia and London to produce his award-winning, seasonal French-American cuisine. Sherman was honored by Food & Wine as one of America’s “Best New Chefs” of 2003; in 2012 was named “Best Chef” in the Great Lakes region by the esteemed James Beard Foundation, an award for which he was nominated five consecutive years prior to winning. In 2008, Share Our Strength named him “Most Sustainable Chef” at the Chicago Taste of the Nation event and later that year he accepted the term position as National Board Chair of Chefs Collaborative; he was also a founding board member of Green City Market, Chicago’s only year-round sustainable market. North Pond was honoured with a Michelin star in 2014 and has maintained it every year since, including 2018.

Share
Combine chicken stock and cider, bring to a boil and reserve hot. Melt butter in medium saucepan and sauté onion until soft but not colored. Add rice and stir until...