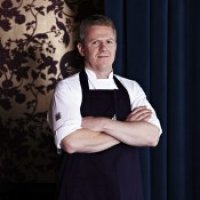 Brendan started his apprenticeship in 1987 at the age of 15 at a restaurant called Redgum Inn in Shepparton. After serving 3 years and getting his wheels he went straight to Melbourne.

After 12month at both Portofino Bistro in South Yarra and the Last Aussie Fishcaf in South Melbourne, he landed a job at Jacques Reymond in 1992 and was there 3 years.

In 1996 it was on to Matteos Restaurant where he held the position of Sous Chef for 3 years.

Learning that Teage Ezard was opening Ezard’s in 1999, his own restaurant in the city, Brendan decided that this was an opportunity too good to miss so he applied to be Teage’s Sous chef. After 6 months of hard work, getting the team together and systems in place, Brendan was promoted to head chef and held this position for the next 41⁄2 years.

After a few months break it was back to Matteos to steer a new direction Matteo wanted to take his restaurant. Brendan saw this as another opportunity to fully develop his own style.

Recent trips to Japan [and a Japanese wife!] have inspired him to embrace an even stronger Japanese influence in his cooking style. He often argues with Matteo of the synergies between Japanese & Italian cuisines, citing both cuisines respect for the natural integrity of ingredients rather than over working dishes to make them ‘fancy’.

Brendan stresses that his style is not fusion food, but rather, features fresh seasonal produce with Asian flavors incorporating European techniques. He sources ideas from visiting markets and Asian grocers along with reading many books and dining out regularly.

His inspiration stems from wanting to develop his own unique signature style that clearly states “Brendan is cooking”.

Share
Raviolo: Pick through crab meat to get rid of any shell. Process fish fillet in food processor for 10 seconds. Add the egg white and whizz for 10 seconds more....